Ants and the Overlooked Opportunity for Ongoing Income

Ants have a lot going for them. Let’s examine why, so we can gain the upper hand. 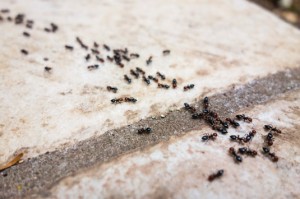 When you knock out an ant population in a zone, the zone is void of ants. The ant void will not remain empty, however. Photo: ©istock.com/Dario Lo Presti

It’s important to understand basic ant management principles based on their behavior. When you knock out an ant population in a zone, the zone is void of ants. Then, one of two things can occur: The timeframe can range from hours to months, but the ant void will not remain empty. Here are more observations to help you at your ant accounts:

⦁ Ants are social insects that depend on one another for survival. Avoid the term “stray ants,” because they all work for the good of the colony and are directed where to go.

⦁ Adult ants cannot swallow solid food. They must carry their food back to the nest and have the late-instar larvae digest it for them. These larvae are referred to as the “belly” of the colony. The larvae regurgitate the food in a slurry form, which becomes the adult ants’ food. Most ant baits are slow-acting because workers must bring the bait to the colony and have it pass through the food chain to reach and kill the queen.

⦁ Ants send the older workers out to forage and defend the nest. Killing adult ants will not eliminate a colony.

⦁ Not all ants create new colonies by swarming. When ants have satellite nests, they can move into a structure in one evening with thousands of ants.

⦁ Ants communicate via pheromones. They also deposit pheromone trails for other ants to follow. Strong, established trails can remain viable for years.

⦁ In general, ants are more active at night. If you’re having trouble, try returning after dusk to find active ant trails.

⦁ Ants can decimate ant bait within minutes during one visit, and completely avoid it during the next. The ants must have a need for the protein or carbohydrate contained in the bait to accept it.

⦁ Ants enter structures for several possible reasons, including, but not limited to, a need for food or water. It helps to determine the root cause. In nearly all cases, though, the ants originate from outside the structure.

⦁ Because vegetation grows and changes as a neighborhood ages, the predominant ant species in the area also changes. Keep this in mind when setting up your pest management program for homes in a new development. You might have to change strategies within four or five years.

Ant inspection, step by step
Here are some steps to take when looking for ants:

1. Interview the people living with the ants. Where do they see them? When did the problem start? What time of day or night are the ants most active? If children are present, I always ask them. They often know more than the adults.

2. Conduct an exterior perimeter search, checking large trees on the property closest to the structure. Pull back sections of grass adjacent to the building to look for ant trails. Turn over debris, and check around the garbage and barbecue areas, as well as any pet food and water dishes.

3. Look for active ant trails leading to the structure. Look for lines leading to the building. Examples include the top and bottom of a picket fence, sidewalk edges and a hose left on the ground that’s still attached to a spigot. Other typical trail spots include raised roots from large hardwood trees, anywhere shrubbery touches the structure, and where electrical and gas lines enter the building (above and below ground).

4. Pay attention to common signs of infestation. For example, look for dark sooty marks on leaves created by aphids or other sap-sucking insects. They are a prime food source for ants. Also check tree stumps, crawlspaces and soil for ant nests.

5. Wrap up with a thorough interior inspection. Inside, pull the carpet back along floor and wall junctions, and check at ground level for signs of infestation. Also look under and in live plants.

Try to avoid spending so much time inspecting that you have no time to treat. Inspections do not kill ants, but they sure make the treatment more effective. The more jobs you do, the easier it becomes to quickly pinpoint the most likely places the ants will trail.

Do you suffer from baitamania?
Because of the phenomenal success the pest management industry has had with ant baits, some professionals tend to expect dynamite results every time one is used — or “baitamania.” Remember, there’s no such thing as a silver bullet in pest management.

Here’s a list of common reasons why baits may not work:

1. Not enough bait is used for an ant supercolony. Once ants eat all the bait that’s been placed, a signal is sent to the colony to look elsewhere. By the time you come back and place more bait, it’s too late — they’ve moved on to another food source.

2. The bait is placed in the wrong location. The ants are entering through the roofline, and you have bait on the ground, for example.

3. The wrong ant species took the bait. You placed the bait in the daytime, so diurnally active ants took it. The nocturnal ants you wanted to reach came out after the bait was gone.

4. The wrong bait is used. Even if you put out a buffet with three different products, some ants won’t be happy with your selection.

5. The bait worked, but another ant colony moved in within a few days. As far as the customer is concerned, this is a failure on the part of the professional.

6. The liquid/gel baits evaporated in the sun. The concentration of the active ingredient can become too high and kill the worker ants before they can reach the queen.

7. Outside influences prevailed. Pesticide and/or tobacco odors from within your vehicle (or on you) contaminated the bait. Perhaps the lawn care crew treated with a residual over the bait.

8. Mother Nature prevailed. Heavy rains can wash away bait. There have also been cases where a natural event occurred that made the ants full — feasting on cicadas emerging from the soil, for example. It would be just your luck to bait with a protein the next day.

So, what do you do when baits don’t work? Stop baiting and use a different approach. Dusting lightly in wall voids, behind electrical plates and behind baseboards, for example,  can sometimes work wonders. A general nonrepellent residual on the exterior, per label directions, also helps.

Look to systemics to knock out insects on the plants that are attracting the ants. Take the time to study where ants are trailing to make your treatments more effective.

Ant identity crisis
Identifying ants can be brutal. Swarmers are almost impossible to key out, as few, if any keys exist. You must have a great stereomicroscope and proper training to key out ants down to genus and species.

What happens if you identify the ant incorrectly? Sometimes you can get away with it because the general treatment you used works on a number of species, and you were lucky enough to have the correct group of controllable species.

Many times, though, you will not obtain control. Why?

1. You didn’t put enough bait down because the ant species has a supercolony. They ate what you left and now report that the bait is all gone. They now forage elsewhere in the structure.

2. You did not realize the colony could be in the exterior wall. You used a repellent, which now locks the ants inside and causes them to spread.

3. It was pharaoh ants (Monomorium pharaonis). With a general spray treatment, you get temporary relief — but within 30 days, they might show up in 30 different apartments because of your wrong approach to control.

4. The ants are arboreal (in trees). You treat at ground level, and the ants crawl from the trees over to the roof and into the structure.

Space invaders
What happens when you encounter a new invasive ant species, and current control methods are ineffective? A good example is ants belonging to the genus Hypoponera. This obscure ant would probably go unnoticed — except for the fact it stings, and can lead to breathing difficulties for some.

My first encounter with them was in a nursing home in Connecticut. The pest management professional (PMP) was having difficulty obtaining control, and the facility had to evacuate a wing after one of the patients had a severe reaction from the ant stings. I collected some ants and could not identify them. I sent them to entomologists at Cornell University. They excitedly informed me they wanted more specimens from this evidently rare occurrence. I wanted to know how to control it. They didn’t know.

Because these ants are from the tropics, they continued to swarm week after week. We caught several in insect light traps (ILTs). However, foam treatments in wall voids and even a mini termite sub-slab job did not stop them.

Fellow PMP Hall of Famer Dr. Roger Gold at Texas A&M, who had previous experience with these ants, helped me finally obtain control. It was winter, and he told me to go to the kitchen, bust up the slab and insert a rodent bait station. I was instructed to then place fresh mealworms, chopped up and covered with an abamectin dust, in the station. It worked.