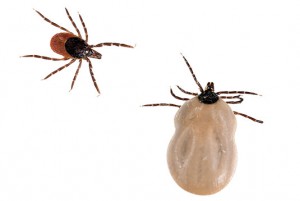 A female tick can triple her size when engorged. Photo: ©istock.com/Goldfinch4ever

DESCRIPTION: These hard-bodied ticks are dark brown or black with long mouthparts. The female is orange or red behind the scutum (shield), which has no pattern. The male is black and about half the size of the unfed female (1/8 in., though she can be as large as 3/8 in. when engorged).

LIFE CYCLE: In spring and summer of the first year, eggs hatch into larvae, which feed once and molt into nymphs, which become dormant during the fall and winter. In May through July of the second year, nymphs feed aggressively. During fall, nymphs molt into adult male and female ticks. Females feed on deer and other large mammals, mate, place eggs and die. If females don’t feed in the fall, they’ll seek a large mammal host the following spring. Male black-legged ticks attach briefly, but repeatedly, to a host to wait for females. Adults mate before feeding and attach to deer, sheep, dogs, cats and humans.

HABITAT: In and around wooded areas (ecotones). Ticks tend to congregate along paths, trails and roadways.

FOOD: Blood is the primary source. Larvae tend to prefer the blood of the white-footed mouse and white-tailed deer.

Dr. Stuart Mitchell, D.O., Ph.D., M.P.H., B.C.E., a board-certified physician and entomologist, is principal technical specialist for PestWest Environmental, as well as PMP’s Technical Editor. He can be reached at docmitchell@northcoastmedia.net or 515-333-8923.