Humor in Uniform: Under Observation 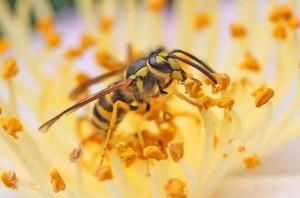 When I pulled up to Mrs. Brown’s home that long-ago summer, I noticed she had two adorable preschool-age kids, one boy and one girl. I stepped out of my vehicle and exchanged the normal pleasantries with her before investigating a yellowjacket problem, in which the pests had dug into a garden wall reinforced with railroad ties. I asked Mrs. Brown to take her two kids indoors so they wouldn’t get hurt, and then I headed for the nest.

I put on my rubber gloves, but didn’t bother putting on any other safety equipment. I inserted my extension wand into the nest hole and gave them a mighty puff of dust. As I was standing there, admiring my work, I turned in horror to find that the girl was on my right and the boy was on my left. At that same moment, hundreds of angry yellow jackets started pouring out of the railroad ties.

Like a thief in an open market, I grabbed the boy under one arm and the girl under the other arm and I ran for the house. As I covered the 100 ft. between the garden and their home, I was pelted with upset yellow jackets. Through a hazy fog of fear, anger and panic, I remember spewing a non-stop verbal assault on my stinging foes.

Mrs. Brown opened the door for us and I hurried the kids inside before diving indoors myself. As I lay there on her kitchen floor, feeling the repercussions of the many stings on my neck and arms, I remember wanting to question her on why she would let her kids go outside. But as I opened my mouth, her son asked, “Mom, what is a sonofabeachbug?”

Stung for a second time!