Well, the first day of PestWorld 2015 has drawn to a close and as we all shlep back to our rooms (or restaurants … or bars … or what-have-you) exhausted but enlightened, we carry noggins full of almost more pest-management intel than we can handle. It was a big busy day for everyone — including your intrepid PMP staff.

After setting up our new and improved expo booth — complete with a micro video studio where Editor-at-Large, Jerry Mix, and digital media producer, Kelly Limpert would later conduct interviews with familiar industry faces — we hit the ground running in various directions. 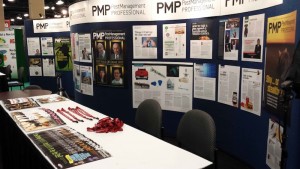 PestWorld started in earnest this morning with the opening ceremony which included a welcome by NPMA Chief Executive Officer, Bob Rosenberg. The main attraction came in the form of acapella singing group, (the aptly named) Street Corner Symphony, who rocked the roof off the Gaylord Opryland with an act that was one part Mills Brothers-style vocalization mixed in with some old-school rap beatboxing and sterling harmonizing. Kinda’ like a street-corner doo-wop group with a country aesthetic and rock n’ roll attitude. (You’ve never witnessed true beauty until you’ve seen senior pest management veterans tapping their toes to a cover of the theme song to ‘Fresh Prince of Bell Air.’ 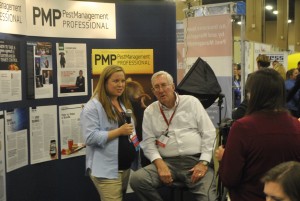 Editor-at-Large, Jerry Mix getting the scoop from people who know.

After that attendees moved en masse downstairs to the expo floor packed with wall-to-wall vendors, suppliers, manufacturers and more. The energy in exhibit hall was infectious. New faces, familiar faces, new personal and professional connections, and the type of cutting-edge innovation you don’t see in just any old expo of other industries. A swing band, celebrity impersonators circulated through the exhibit hall vying for attention with hundreds of exhibitors all eager to introduce themselves and their products and services.

PestWorld 2015 has already proven itself to be one of the most energized, well-attended (seems as though there were more international attendees than I’ve seen in previous years) PestWorlds ever…

… and we’re only getting started!

Hopefully most attendees brought their most comfortable shoes because the Gaylord Opryland is one serious piece of real estate. It took me no less than 8 minutes (Yeah, I timed it.) to walk from my room to the convention center. It’s a venue unlike any I’ve seen before, where hotel guest room hallways empty out into large ornate lobbies that lead to a series of winding paths through beautiful foliage. Native flowers, waterfalls, fountains, canals (which you can cruise in lazily floating boats), shops restaurants, gift shops, and more blend more seamlessly than you’d guess considering everything I’ve just described is under one glorious glass roof. Sometimes you forget you’re NOT actually outside. But the walking … oh, the walking. I’d expect everyone’s dogs are barkin’ right about now. I used to make fun of able-bodied people scooting around on Segues. Today I reconsidered that stance. Seriously — check this place out!

Now, if you’ll excuse me, this bleary-eyed blogger is down for the count, ready to recharge my batteries with a good nights sleep so I can meet up with my colleagues in the A.M. and do it all again. See you on the expo floor. Stop by our booth, grab a copy of our latest issues (complimentary, of course), order one of our books and talk to me and the rest of the PMP gang, if you can get us to stand still for longer than thirty seconds.

Time permitting, tomorrow I’d love to share some pics and details about Monday night’s PMP Hall of Fame ceremony, so … watch this space! In the meantime, check out our coverage on the homepage at mypmp.net.
w