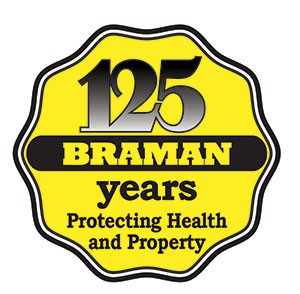 Braman Termite and Pest Elimination, based in Agawam, Mass., has collected more than 50 winter coats from employees and other local businesses in western Massachusetts to donate to the Coats for Kids campaign. They will continue collecting until Jan. 8, 2016.

The Salvation Army Coats for Kids campaign was established in 1980. Each year, dozens of local businesses and organizations take part in the initiative to keep kids warm by collecting gently used or new winter coats. The initiative asks members of the community to donate new or gently used winter coats that have been outgrown or simply not worn. Belmont Laundry has pledged to clean every coat before it is distributed to children in need and other businesses support this project by donating coats and serving as drop off points.

“The Salvation Army ‘Coats for Kids’ campaign is an essential program because there are so many young people in our community that go without during the winter months,” says Jerry Lazarus, third-generation owner of Braman Termite and Pest Elimination. “Supporting community initiatives is very important to all of us here at Braman, and we are proud to report that we have collected more than 50 coats this year.”

“We are asking our customers and employees to donate winter coats that have been outgrown or simply not worn,” says Lazarus. “The more local businesses that participate, the better the campaign will go, and the more coats will be collected for people in need. We want to extend an earnest thank you to every person and surrounding business that made a contribution to the campaign in western Massachusetts this year.”