Another fantastic PestWorld, hosted last month by the National Pest Management Association (NPMA), is behind us. There was so much to see, do and cover that we will be bringing you news about it for issues to come!

The highlight of PestWorld for our staff was inducting the Pest Management Professional (PMP) Hall of Fame Class of 2015 on Oct. 19. We have many photos online at PMPHallofFame.com. We also gave Editor-at-Large Jerry Mix a microphone and Digital Editor Kelly Limpert a video camera, and let them go crazy in our booth with any attendee who happened by. The results are awesome — and on our YouTube channel, PMP TV.

A few additional highlights include:

⦁ With eager attendees filling the hallways of the Gaylord Opryland Resort and Convention Center, PestWorld 2015 kicked off with words of change from National Pest Management Association (NPMA) CEO Bob Rosenberg and a lively beat at the opening ceremony. It embodied how the NPMA is adapting to, as Rosenberg quipped, “meet the 21st-century needs of 21st-century members.”

⦁ Three days later, Rosenberg was honored with the NPMA Pinnacle Award, recognizing his decades of dedication with the association before he retires early next year. Other honorees included Deni Naumann, president of Copesan Services Inc., who received the 2015 Women of Excellence Award, and Stanford Phillips, vice president of marketing and business development for Northwest Exterminating, who earned the 2015 Young Entrepreneur Award.

⦁ The NPMA’s Professional Women in Pest Management (PWIPM) committee recognized Sheila Donatelli, a Charlotte, N.C.-based certified trainer for Steritech, with its 2015 Empowerment Grant. She plans to use the funding for business education. 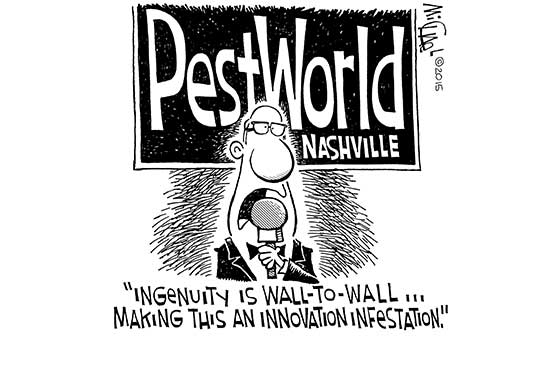