Giving Back: Community Involvement is Company-Wide 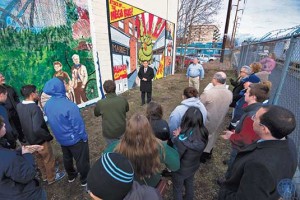 When your town’s Chamber of Commerce selects you to receive its first-ever Community Service award, there’s no denying your knack for helping out.

Galvin Murphy, ACE, owner of Yankee Pest Control in Malden, Mass., received the first Community Service award from his local Chamber of Commerce last year — even though he has been helping those in need ever since he launched his company 25 years ago.

At first he got involved by sponsoring youth sports teams. A veteran, he enlisted his friends to help send care packages to soldiers stationed overseas. Lately, he’s helped the homeless and hungry spread holiday cheer to families in need, and beautified his neighborhood. He’s not doing it alone, however. Yankee Pest Control now has 22 employees and they all get involved, too.

“We probably do more than most companies just because I like to do it,” Murphy says. “It’s fun.”

He also does more than simply write charitable checks. He truly lends a hand.

“It’s nice to throw money at a charity, but that’s really all you’re doing,” Murphy says. “Get involved and help them out. Show up and give them tools or equipment or a truck to work with.”

As a longtime member of service organization Kiwanis International, Murphy notes, there’s never a shortage of projects. “Once you get involved in a service club like that, everybody gets to know you,” he says. “If you call, they’re going to help you out. But they’re also going to call you at times, needing things.”

Find a need, fill a need

Murphy always seems to find a way to fill a need in his community. For instance, when Yankee Pest Control’s building, which is situated near a popular bike path, became a target for graffiti artists, he got creative.

“We figured we would do something both to keep the kids from ‘tagging’ and to give people something to look at when they use the bike path,” he says.

Three local high schools stepped up and designed and painted three separate murals. Yankee Pest Control provided painting supplies and refreshments. As they were finishing, Murphy announced a contest whereby city residents could vote for their favorite mural. The winning school received a $1,000 grant for its art department; the other two schools received $500 each.

Murphy says various organizations in his community can always use a hand, so Yankee Pest Control donates the powerful generators it employs for bed bug heat treatments for use at festivals and charity races. Employees drop them off and pick them up later. “You just have to schedule your work around it,” he says.

Company vehicles are in demand, too. Two Christmases ago, Murphy was helping out by loading up one of the company’s box trucks with toys, coats and food for local families in need. He dropped off a donation for a mother and her four children who were staying at a hotel after being forced to leave their home with nothing but the clothes on their backs.

“They had nothing,” Murphy says. “So when they saw what we brought, they all went nuts.

“The littlest one grabbed the oldest one and said, ‘See, I told you Santa Claus would find us,’” Murphy says. “When that happened, I said we’re going to do more next year.”

True to his word, the following holiday season he enlisted the help of several of the restaurants his company services to donate proceeds from meals and special events, and to set up collection boxes for donations.

“The people who work in the restaurants kept us motivated, and we kept them motivated,” he says.

Murphy says there are plenty of reasons to help out in the community, but winning an award shouldn’t top the list.

“When you can feel good about what you’re doing, that’s always good, too,” he says.

You can reach PMP Managing Editor Diane Sofranec at dsofranec@northcoastmedia.net or 216-706-3793.