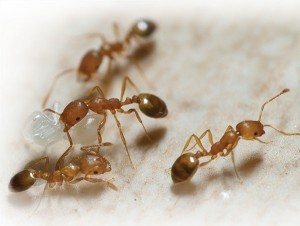 Infestations of pharaoh ants (Monomorium pharaonis) can be a persistent source of consternation for pest management professionals (PMPs) in commercial and residential accounts. Their small size makes it easy for populations to be introduced. Infestations are often overlooked until populations have increased and multiple colonies have become established. Understanding the biology and behavior of this ant is critical when considering a management plan that will result in satisfactory control.

Pharaoh ants are best known for the budding habit colonies exhibit in lieu of swarming. Daughter colonies are split off from the initial colony when populations get too large, food becomes scarce, or colonies are disturbed. Although not unique in this colony splitting behavior, much attention has been paid to educating technicians about the importance of avoiding insecticide sprays and focusing efforts on bait-only treatment strategies for pharaoh ants. Today’s technicians have the luxury of multiple bait brands, formulations and active ingredients from which to choose.

Today, nonrepellent insecticides are being incorporated into treatment protocols with increasing frequency. Such products are labeled for use as crack-and-crevice or spot treatments in areas where ants have been observed foraging. It’s good practice to avoid direct treatment of foraging trails, because enough disruption may occur to cause splitting. Instead, focus on cracks and crevices near areas of known activity to deposit a residue that ants will encounter after it’s dry.

Once pharaoh ants have taken a foothold in a structure, gaining control can be a difficult and time-consuming process. This is primarily because multiple colonies can be present in a structure, each possessing the potential for quick population growth and for budding.

Knowing what tools are available, and knowing when to use them, can be the critical difference between defeat and victory in the battle against pharaoh ants.

Which ant species are most often misidentified?

Are pharaoh ants leaders of the pack?

Ants and the Overlooked Opportunity for Ongoing Income