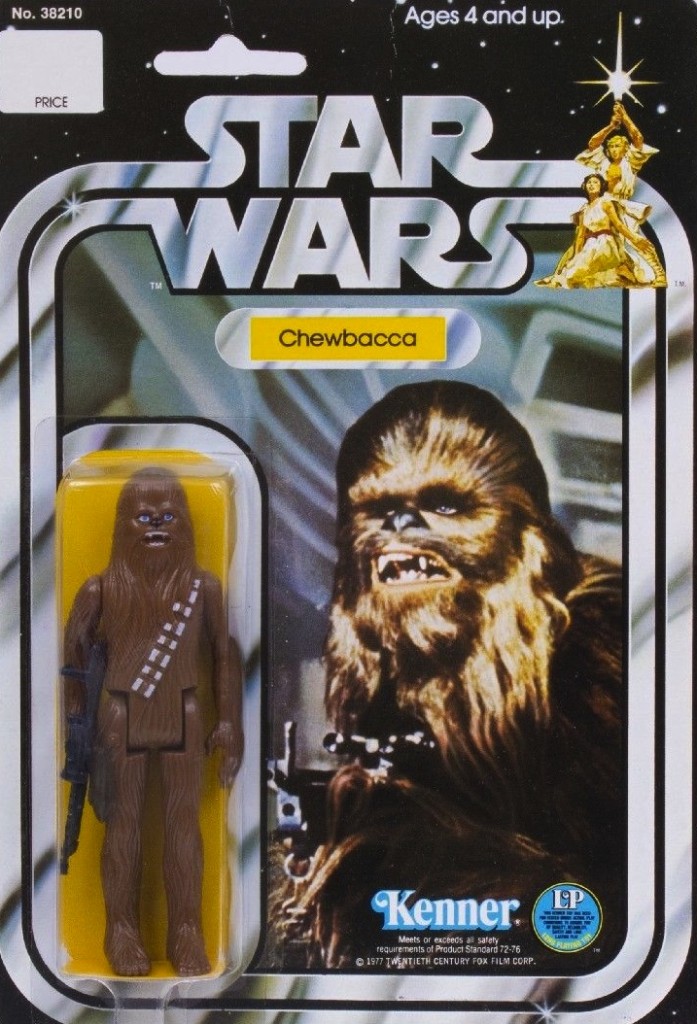 Rather than tempting fate – and Lucasfilm’s legal dept. – with a movie still, here’s a pic of one of my first toys, as pictured on Ebay. (Only $2,000!)

Had enough ‘Star Wars’ yet? (Ain’t no such thing, if you ask this nerd. By the way, did you catch our April issue cover?) No sooner does ‘Episode VII’ hit DVD and I’m already eagerly awaiting the first trailer for ‘Episode VIII.’ It would be sad, if it wasn’t an attitude I share with about 75 percent of the global population.

To get a real feel for how far the long, golden, protocol-droid arm of ‘Star Wars’ reaches, consider this: A tiny weevil recently discovered in New Guinea has been christened Trigonopterus chewbacca, after the Wookie co-pilot, and friend to Captain Han Solo, Chewbacca. (Chewie to his friends.) Of all the hundreds (yes, literally) of characters in the ‘Star Wars’ canon, why a Wookie weevil?

The dense layers of scales on the weevil’s legs and head reminded scientists of Chewbacca’s fur. … Hmm. Well, OK. I guess that makes sense … I guess.

Nevertheless, the weevil is one of four new weevil species identified on the island of New Britain in the Bismarck Archipelago in New Guinea. It is flightless and is typically found in forest leaf litter. The real Chewbacca, by comparison, loves flying and can typically be found in the Millennium Falcon seated next to Harrison Ford.

Lest you think this is a silly one-off phenomenon borne of the imaginations of a few entomological ‘Star Wars’ fans, this is not the first time the beloved space epic has inspired names of newly discovered species.

Some examples:
Wockia Chewbacca is a furry Mexican moth.
Polemistus Chewbacca is a wasp. (Also furry? Or maybe its buzz sounds like a Wookie roar? Probably not.)

Peckoltia greedoi is a catfish that looks like a certain green bounty hunter — the one who nearly takes out Han Solo with a laser blast in the very first ‘Star Wars.’ (Greedo! – duh!)

So there you have it. Don’t kid yourself. We live on an entire planet of ‘Star Wars’ nerds. I’m kind of OK with that.

Know of any other pop-culture-inspired insect names? Give me a shout at wnepper@northcoastmedia.net or leave a comment below.
-W.N.
(Source: Livescience.com)