Carpenter ants use tree branch as pathway into home

“The Dark Side of a tree branch is the pathway to many abilities some consider to be … unnatural.” 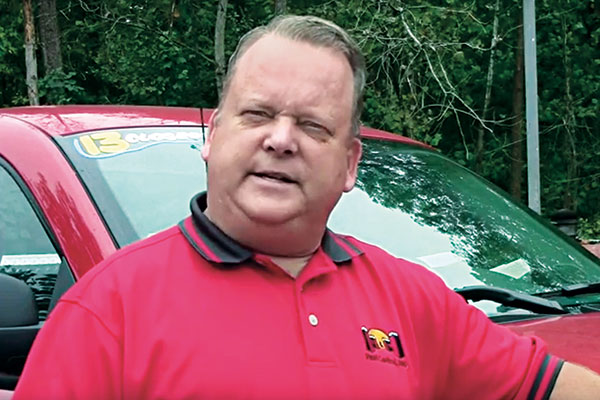 Allen Langley, president of H&H Pest Control Inc. in Shelby, N.C., will do whatever it takes to solve a customer’s pest problem — including climbing up on a homeowner’s roof at midnight.

“With ants, we always have it in our mindset to look down, and that’s what we were doing,” he explains. “Finally, the homeowner said she had seen some frass upstairs in a window, so that got us looking up.”

Until that moment, he and his technician had done everything they could think of to combat the carpenter ants the homeowners complained were on their kitchen floor.

“We had enough product around the foundation and inside to keep the ants from coming in, but they were coming over the barrier completely,” Langley recalls.

After four callbacks, it was time for a frank discussion with the husband and wife. When she mentioned seeing ants and frass in the upstairs bedroom window, Langley eagerly checked it out. He didn’t see anything worth noting at first. But then, he looked outside the box.

“Looking out that window, I could see tree limbs lying on the house,” Langley says. “So I thought, maybe that’s where they’re coming from.”

Knowing that ants forage late at night and early in the morning, he made plans to visit the home late one Friday evening, flashlight in hand.

“I spent time sitting up on the roof, waiting. And sure enough, it paid off,” he says.

After 45 minutes, Langley spotted a couple of ants. Within an hour, he saw hundreds. The carpenter ants were marching up a nearby oak tree, traveling down a limb that was touching the house, and coming across the roof and into the wall.

When Langley followed the ant trail down the tree, he could see a slight path the ants made by chipping the grass. He admits he would not have noticed the path, which led to another tree, if he had not been looking for it. Treating and pruning the trees completely eliminated the ant colonies.

Once the homeowner had the tree limbs that were touching the house removed by a professional, the ant problem was solved. After all, Langley had already treated the home for ants that would enter the “conventional” way.

For Langley, a frank discussion is what led to the source of this perplexing carpenter ant problem. He advises PMPs ask customers a lot of questions — just like a doctor who asks a multitude of questions to make a proper diagnosis.