THE GIANT MUTANT NINJA COCKROACHES ARE (probably not) COMING!

Horror movies are this blogger’s great love, with special affection reserved for sci-fi monster movies of the 1950’s “atomic age,” in which some of our most benign harmless pests become impossibly huge, roaring monsters. (“The Beginning of the End” – about giant grasshoppers – and “Tarantula” are good places to start for those interested.) But atomic age monsters were a horror from another time when atomic energy was mysterious and scary – and its implications unfathomable. By the time we had a foot in the 60s, we were a little wiser and a lot less worried about giant mutant insects.

But, “not so fast,” says Japan, who’ve made an art of battling cockroaches. According to a piece published online as an entry in Vice media’s “Cool Japan” column, there’s one Japanese company, Earth Chemical, preparing for the worst: “a more speculative kind of cockroach,” writes columnist, Emiko Jozuka. “… A future when the bug will have terraformed into a giant mutant ninja roach capable of surviving Martian conditions.”

Earth Chemical is the creator of the “Gorkiburi Hoy-Hoy” – a roach trap disguised as a delightfully smelling food source, which looks a little like a sinister gingerbread house. To brace themselves for the ninja cockroach invasion that may or may not be coming, they’ve blown up their sticky roach trap to 925 times its original size and challenged three volunteers to do their best to make it from one end of the roach-lethal adhesive to the other. (None of them make it. – I mean they LIVE, but don’t make it across.) In the YouTube video that documents the “challenge,” the company declares the informal experiment a success, making clear that the planet will be well defended by Earth Chemical’s sticky traps, when the cockroach apocalypse finally arrives. We’re pretty sure they’re mostly having fun with marketing, as this development stems from the company’s informally dubbed Jouji Lab, from where some of the company’s more fanciful ideas are generated.
-WN 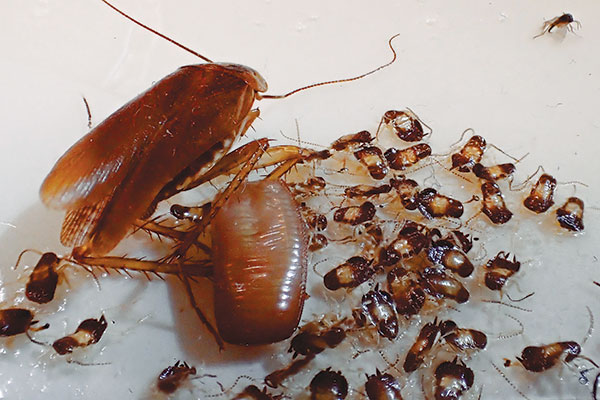