PMPs put the profit pedal to the metal thanks to favorable fuel prices, tricked-out vehicles and routing tools.

What a difference eight years makes. In July 2008, regular gas prices spiked to a wallet-emptying $4.50 per gallon (U.S. average). This year, pest management professionals (PMPs) have welcomed a new low: gas prices fluctuating between $1.75 and $2.25 per gallon — something not seen since the early 2000s.

“If we were able to get by on the budget we used during the gas crisis, we can certainly keep spending that same amount now, reinvesting fuel savings elsewhere to grow the business,” says Bobby Leon, owner of Akita Pest Control, Lancaster, Pa. 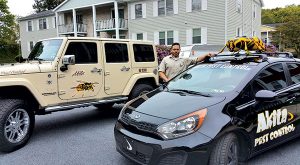 Some PMPs roll today’s gas savings into their general budgets. They reinvest in their fleets and other areas — in equipment, products and people.

Mickey Ferrell Jr., a marketing consultant for HomePro Pest Control in Chesapeake, Va., says money saved at the pump has funded investments such as new mosquito misters and an increased advertising presence.

Some take their extra gas money and invest it mostly (or solely) in their fleets.

“Recently, we’ve had to add more than 20 vehicles per year, due to growth,” says Keith Duncan Jr., CEO of Jeffersonville, Ind.-based Black Diamond Pest Control. “But our money saved on gas has alleviated many of our potential financial growing pains.”

HomePro’s Ferrell says regular tune-ups can help PMPs keep trucks on the road and save money in the long haul.

Who should manage the vehicle maintenance?

Ferrell says so much is riding on it that PMPs must ensure the people assigned the task have the training and time to properly manage the fleet. He warns PMPs against assuming all technicians can add this to their workloads.

Another component of fleet management is maintaining vehicle aesthetics.

“I don’t want any dirty vehicles on the road — unless it’s raining that day,” Akita’s Leon says. “But even then, by the next day, I want that vehicle spotless because it’s a reflection of our company.” 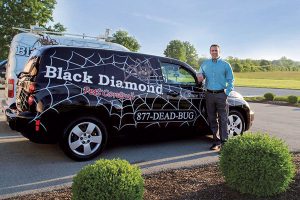 For decades, PMPs have adorned their vehicles with company names and phone numbers. Nowadays, more are grabbing eyeballs with flashy fleets of tricked-out trucks.

If a mouse-ified VW isn’t in the cards, don’t fret. There are plenty of other routes to bold-branding through vehicles. For instance, every day is Halloween for The Bug Reaper, based in Houston.

“Not a day goes by that people don’t stop me to take a picture of our company hearse and tell me how cool it is,” says Tony Esposito, owner of The Bug Reaper. 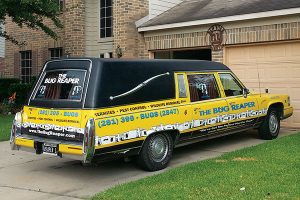 The Bug Reaper knows how to strike fear in the heart of pests: by rolling up to the job in a hearse.
Photo: The Bug Reaper

“We even carry a casket as our toolbox,” Expositio adds. “When folks see the casket, they lose it!”

“The hearse is inexpensive to maintain, comfortable to ride in, and came with low mileage … all at low speeds,” Esposito adds.

Akita Pest Control has gone another direction — a bit higher than 6 ft. under — with its fleet branding. Mounted atop Akita’s vehicles are giant, 3D yellow jacket wasps. The sculptures look like something straight from a ’50s sci-fi movie. 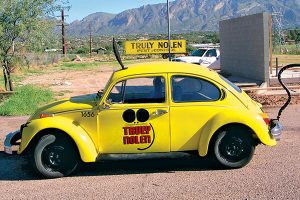 When is a bug like a mouse? When it’s a Truly Nolen signature customized Volkswagen.
Photo: Truly Nolen

Beware: The giant 3D wasp was responsible for an Akita tech being pulled over.

“The police just wanted to get a closer look, ask questions and offer a compliment,” Leon chuckles.

More companies are using fuel savings to upgrade their vehicles with global positioning system (GPS) technology. Many say GPS — especially when combined with routing software from providers like ServicePro and WorkWave — helps PMPs add two to three stops per day per tech. That’s a quick route to rising revenue.

Bill Wert, owner of an Orkin franchise in Tallahassee, Fla., says Fleetmatics’ GPS technology has simplified and optimized his company’s fleet management. If his company fields a call asking for fast service, a dispatcher can look at a screen in the office and see which vehicles are in closest proximity to that account.

“With GPS technology, our technicians can come to the aid of clients who need immediate service much faster,” Wert says. “And when it comes to regular routing and scheduling, you can’t beat it.”

“Not only are we reaping significant savings by leveraging GPS and routing technology, we’re also paying just two-thirds what we used to at the pump,” Wert adds.

HomePro Pest Control in Chesapeake, Va., is just one of many firms investing in vinyl graphic vehicle wraps. Applied directly over the original paint, the makeovers are instant and compelling, says Mickey Ferrell Jr., a marketing consultant for HomePro.

“At first, cost was a sticking point,” Ferrell says. “I knew the wraps would have a positive effect on business, but wasn’t sure each was worth $2,300. It didn’t take long to see a return on our investment.”

Nearly 20 years ago, Black Diamond was among the first in its service area to have its vehicles professionally lettered. Black Diamond kicked it up a notch after CEO Duncan stumbled upon a vehicle wrap vendor at a local custom car show. Duncan and his team came up with a spider web wrap design that snares second looks — and new business.

“Now we have lettered and wrapped vehicles,” Duncan says. “Both get recognized, but the custom spider-web wraps turn more heads and start more conversations.”

Brian Hirsch, director of sales for Protect-A-Bed’s industrial division, stands outside one of the company’s easy-to-spot distribution trucks.

Even when it’s not menacing the public from atop a vehicle, Akita’s well-known wasp makes itself known in some way on most of the company’s vehicles.

HomePro Pest Control in Chesapeake, Va., is just one of many firms investing in vinyl graphic vehicle wraps.

Here are 10 easy-to-adhere-to tips for getting the most from your fleet’s fuel consumption.

The tips here were compiled from a variety of sources, but primarily from the Transportation Research Board: TRB.org