An interview with an Eastern subterranean termite (Reticulitermes flavipes). 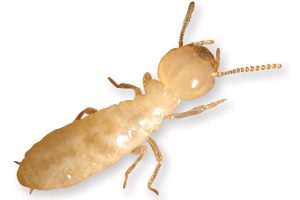 Pest Management Professional (PMP): Thanks for joining me. I hope this interview isn’t too much for you after a full day of work.

Eastern subterranean termite (EST): Oh, I’m always working. Now is as good a time as any. Sorry if it’s a little humid in here, by the way. Can I offer you something to eat? [EST opens a kitchen cabinet and stacks of lumber fall out. PMP declines, discreetly wiping a bit of sweat from his brow, as EST begins gnawing away on his timber dinner.]

I hope you don’t mind me eating during the interview. I’ve gotta be back at my post tout suite, so I’m always eating on the run. [On his way to the dining room table, EST accidentally hip checks the kitchen counter, before tripping over PMP’s foot and crashing into the table.]

PMP: Are you feeling OK?

EST: Oh heavens, yes. Just blind as a bat. It’s amazing I, and the rest of the guys and gals down at the job, ever get anything done. Such is the life of a worker.

PMP: What kind of work do you do?

EST: Oh, you know, the typical worker-caste stuff. Did you see that amazing tubing work — the shelter tubing — outside? That’s all me and my department. We just finished those, and now we’ll be splitting up to repair some older tubes while some of the others stick around to run the cafeteria, beauty salon and daycare center.

EST: Sure! We’re not one-trick ponies, like uh … *cough* … soldiers and reproductives … *cough*. [He flashes PMP a conspiratorial wink.] Not only do we work construction, we also feed and groom other termites, and care for eggs and our kids. If that weren’t enough, we pick up some of the soldiers’ slack and help out with colony defense from time to time, too.

Actually, I kind of feel sorry for those soldiers. All of that good they do protecting our colonies — the sizes of which can range between tens of thousands and 5 million — and they can’t even feed themselves. So we—

EST: I was going to say puke up our leftovers for them. But yeah, help feed them sounds nicer.

PMP: How did you become a worker?

EST: The moment I hatched! It’s luck of the draw, really. We all start out as workers, but life has a way of changing us all in different ways.

PMP: I know what you mean.

EST: We all start out as workers, and most of us stay that way. But if you’re lucky, you might come out the other side of a good molting as a pre-soldier, which will then become a soldier. It’s kind of like retirement for us when that happens. After you’re a soldier, there’s no looking back. You’ll never molt again, but you’ll defend with honor until the day you die.

PMP: Is that what you want?

EST: Don’t we all want to have retirement and honor? Of course, things could go sideways — your species is still trying to figure out whether workers really do develop into nymphs, for example. There’s this whole “Pseudergate” thing that makes the headlines, too. Lots of rumors flying around, but I’m too busy to pay much attention.

PMP: I bet. You seem to be devoted to work, but what do you and your colleagues do for fun?

EST: We swarm, man! In the daytime between February and April, we just bust out all over. It’s like our Burning Man or Woodstock. Our swarms even have that free love vibe. After we swarm, the male and female alates lose their wings, pair up and —

PMP: Remember, this is a family publication…

EST: And, if you’d let me finish, pair up and form new colonies.

PMP: I have to be honest: My species is not a fan of your species.

EST: Stop making things out of wood, and you humans might learn to like us. I mean, it’s not like we don’t play a critical role in decomposing dead organic matter that keeps nature in balance or anything. In fact, some smarter humans in your academic castes have even said our contribution to regulating the environment outweighs the disadvantages of us destroying the integrity of your precious living structures.

PMP: Well, I’ll try and spread the word. Thanks for taking the time to talk to me.

EST: No problem. But I should probably clean myself up before returning to the job. How do I look? No vision, no mirrors.

PMP: You look … soft-bodied … kind of creamy white … round head …

EST: Perfect! [EST leans in to shake PMP’s hand, misses by about a foot and takes a tumble that sends him right out the door and back to work. He shouts from outside.]  Don’t take that human gift of sight for granted. Ever!