Polistes apachus, commonly encountered in the western U.S., can act menacingly when foraging for nest materials. But their Achilles heel just might be plain old H2O. 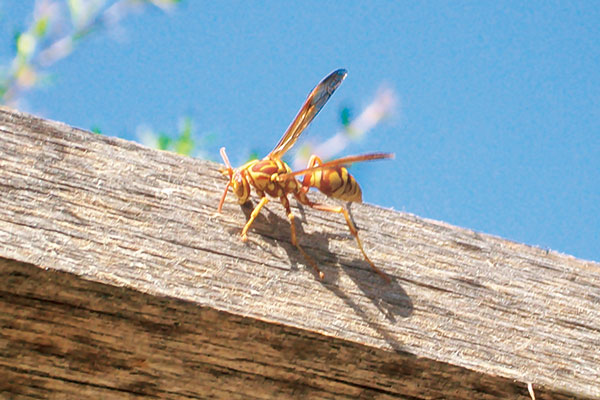 Paper wasps (Polistes spp.) sometimes pose aggravating problems at human habitation. Over many years of delivering pest management services to homeowners in southern California, I have dealt with cases of paper wasps landing directly on the surface of water in swimming pools to drink and/or collect water, especially on hot summer days. In southern California, particularly in inland areas, summer temperatures often exceed 100°F for weeks at a time. This becomes a frustrating problem when large paper wasp nests are on neighboring properties that you cannot access or treat. Homeowners with small children frolicking in and around pools are deathly afraid of these wasps, and they may be skeptical of explanations that the wasps are invading from neighboring areas rather than their own yard. They often insist that something be done to alleviate a virtually impossible situation.

In February, I observed several female Apache wasps (P. apachus) flying in my backyard in Ontario, Calif. We had a mild winter, and temperatures were in the mid 80s. As a result, wasp foundresses (new queens) were beginning to construct nests at several sites under the eaves of my house much earlier than normal.

I watched as the wasps scraped weathered, construction-grade lumber and removed cellulosic wood fibers (see Fig. 1). They seem to prefer certain types of aged wood, because the weathering causes external wood fibers to become loosened from poles, plant stakes, posts, etc. They would repeatedly return to the same piece of wood to gather cellulose fibers. On one occasion, I observed five wasps — four P. apachus and one P. fuscatus aurifer, commonly known as the golden or northern paper wasp — remove wood fibers from the same piece of wood at the same time.

By mid-February, 10 different nests were being constructed on various sites on both the first- and second-story eaves of my home. As the skittish wasps went about their tasks, they posed a menace to my family as we did yard work, took out the trash, gardened or simply tried to enjoy the yard.

Unlike bees, which have barbed stingers that rip out after a sting, causing the death of the attacker, paper wasps have needle-like stingers that they can use to sting repeatedly. The idea that paper wasps typically do not pose a threat to homeowners unless the nest is disturbed is not entirely true. On one occasion, I came within 2 ft. of a paper wasp nest in a citrus tree in my backyard. Although I was not stung, the wasps on the nest bristled with activity as if they were spoiling for an attack. 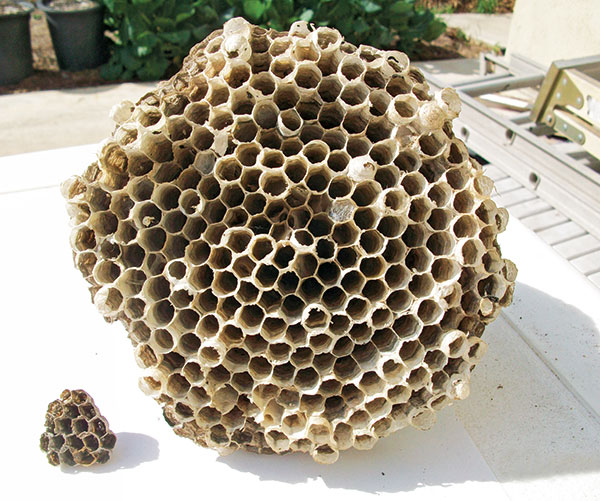 My wife, however, was not so lucky: She was stung by a wasp constructing a nest about 5 ft. above her head, on the eaves of the garage above the back door. She had neither disturbed the wasp nest nor swatted at the wasp. She was simply walking by the area when she was stung. Luckily, she was not allergic to the venom.

On March 27, my daughter and I were sitting on chairs on the rear, uncovered patio of the house, reading the newspaper. Paper wasps were also making the most of the warm day, with the temperature at about 80°F. They were flying about the area, foraging for cellulose material.

In the spring, these wasps hunt exclusively for wood fibers, as there are no larvae present in the nest to feed. Adults do forage for their nutritional sustenance on sugary items such as nectar, honeydew, fruit juices, etc., but none of these food sources were available in my yard at that point in the year.

I counted nine wasps within 30 minutes, in an area that is about 2,260 sq. ft. These are large, reddish-yellow wasps that fly slowly, with legs trailing under and behind them. They can engender fear in people when flying about the place, as my daughter can attest (frantically wondering why I was calmly counting them for a half hour instead of taking refuge inside). 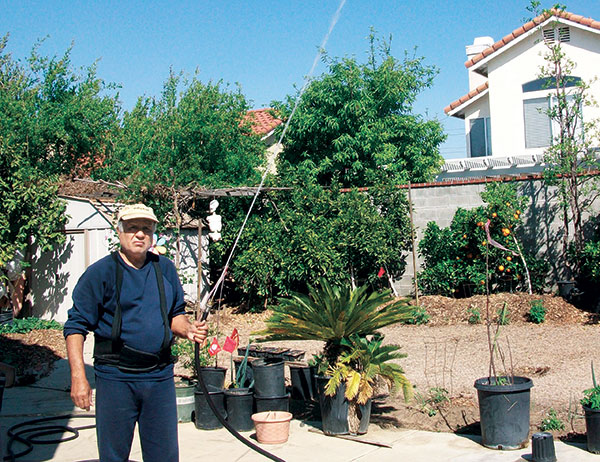 As spring turns to summer, paper wasps often forage on properties for wood fibers for building more nests, caterpillars to feed their young, and water and sugar for adult nourishment. They often do this from nests not located on the affected properties. For example, I can see paper wasp nests on the second-story eaves of my neighbor’s house on the north side, which faces my property. These nests go untreated year after year.

Early-season paper wasp nests, like the one shown on the left side in Fig. 2, can be easily demolished by directing a high-pressure stream of water from a jet nozzle attached to a water hose. The small wasp nest in Fig. 2 contained 18 cells, each of which had a single egg in it. When discovered, this wasp nest had two adult wasps on it — most likely, the original foundress and a subservient gyne (mated female). It was located on the high ridgeline eave of the second story of the house.

The water pressure generated from the jet nozzle was high enough to reach the area well above 30 ft. from the ground. The house in the background shown in Fig. 3 is the same model as mine, and the second-story roof peak eave area is where the wasps were building a nest on my property.

Early-season wasp nests are best treated with high-pressure water early in the morning, when all the inhabitants are on the nests and it is still cold enough to inhibit wasps from taking flight because of low body temperatures. As the wasps fall to the ground, they can be easily crushed. Fallen wasps had to be quickly located and killed; otherwise, they rapidly dry their wings by fanning them and they can take flight. 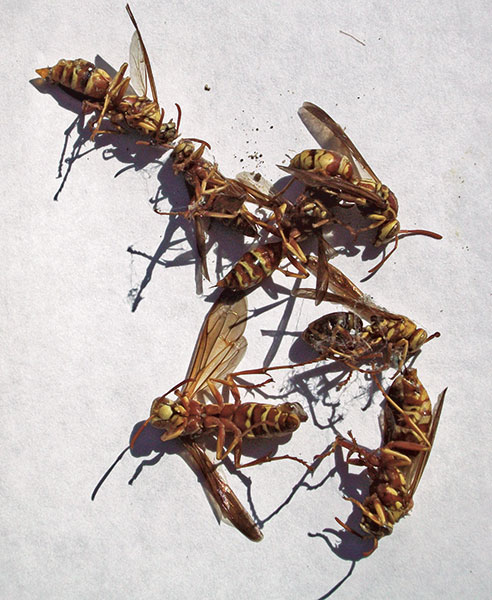 Fig. 4 on p. 52 shows eight foundresses that were dispatched by water treatment and crushing. The drawback to using plain water, of course, is that there’s no residual: New foundresses arriving later in the season will often start building nests at the same locations. Wasp secretions at the base of petioles where they were attached to a substrate seem to be very attractive to foundresses who are searching for nest sites.

This spring, I water-treated early-season nests on my house in late February and again in late March. However, it is wise to demolish early-season nests and prevent them from developing into large nests with hundreds of wasps on them, so as to reduce the threat of stings later in the year. Here are some tips:

When I was a technician, we received a call on a long holiday weekend from a homeowner who was tending a BBQ grill in his backyard: “I saw a wasp flying across my yard. Can you come and do something about it? My kids are afraid of those things, you know.” The customer understood that he had signed on for 24/7/365 service, and he decided to use the service on that day for a single wasp flying across his yard.

From a technical point of view, paper wasps foraging for nest materials are more of a perceived problem than a threat. However, to the people who feel threatened, the hazard is real. Destroying small, early-season nests on a structure with a high-pressure water jet can reduce wasp activity on a property and alleviate the threat. It is also a non-chemical method of management, which can be employed in highly sensitive environments.

This particular paper wasp has been referred to as the “Apache wasp” most likely because of its species name, Polistes apachus (Saussure). It reportedly was introduced into California from Texas about 1920. Apache wasps are now common in the central valleys and have become the most frequently encountered paper wasp nesting under the eaves of buildings in southern California.

They also nest in fruit trees, vines, shrubbery and other bushy areas, where their presence interferes with the harvesting of fruits, trimming of hedges and pruning of landscape plants.— H.G.

Contributor Hanif Gulmahamad, BCE, is an urban and structural entomologist and consultant based in Ontario, Calif. He can be reached at entodoc@verizon.net.