Carpenter bees: A game of hide-and-seek

Carpenter bees (Xylocopa spp.) can nest where you least expect it.

To be honest, I wasn’t thrilled to be going on a ride along for a carpenter bee job. Ever since a childhood birthday party was overcome by a siege of yellowjackets (more about that fun day can be found in our June 2011 issue), I’ve developed a mild phobia toward stinging insects. It had been awhile since I’d covered carpenter bees for the magazine, but I should have known I didn’t need to worry. Not only because a sting is unlikely, but because as you’ll read, the buzzing wood-destroyers can be rather elusive.

I start my day with Andy Senese, co-owner of All Pest Exterminating (A.P.E.) in Richmond, Ind. (The slogan on their business cards? “Don’t Get All Pest Off.”) With coffees in hand, we set out for Senese’s first job of the day. We are meeting one of his technicians, Kenny Turpin, at the site. Turpin will be doing most of the ladder climbing and dusting, while Senese talks to the customer, supervises Turpin, and explains to me what I am watching.

On the truck ride over, Senese explains that the homeowner at this account is a previous customer. She has returned to the company for an assist after seeing just a few bees buzzing in and around her two-story home, off the beaten path on a state route in Richmond.

After we arrive on the scene, the customer explains she has seen the bees both outside and inside. She indicates places on the home’s exterior where she believes they are centralized. She does not seem worried, as she is clearly comfortable with the A.P.E. team’s ability to solve her problem as they had in the past. 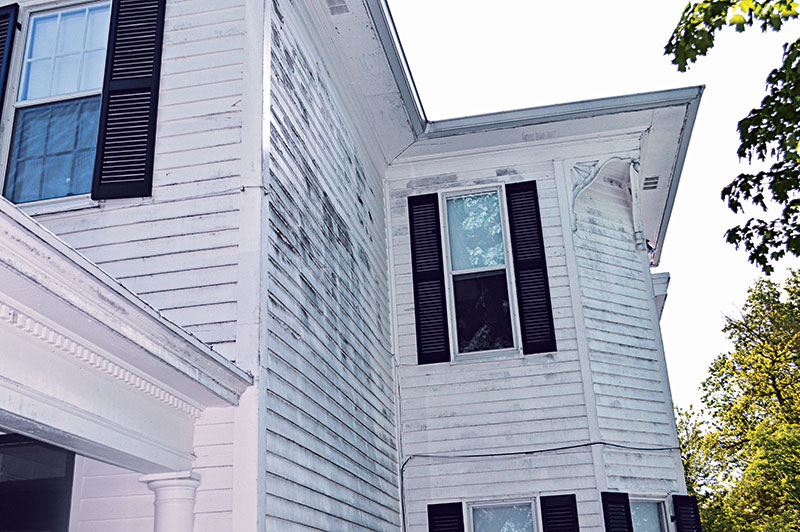 It doesn’t take long for Senese to identify the telltale signs of carpenter bee activity. With the customer still standing nearby, he gives her a quick crash course on what she has been seeing, as well as what to expect from carpenter bees.

“That looks like exactly what I expected,” says Senese, pointing up to a tiny hole under a crease in the roof. The woman nods, clearly happy that he has found the source of what she has seen.

“Well, it’s unlikely you’ll be stung because the [carpenter] bees you’re seeing are males, and they can’t sting,” Senese says. Immediately, I hear a subtle relieved sigh from the customer. “But they can still cause significant damage, so it is something you’ll want to take care of before it gets worse.” 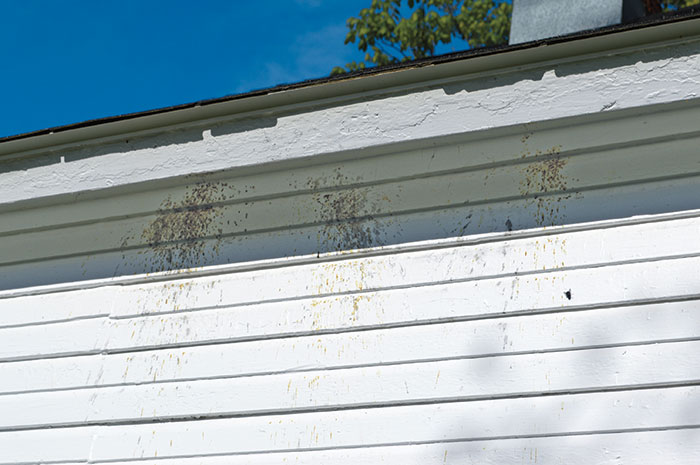 The customer may have seen a few stray bees in the main house, but frass stains on the coach house’s siding belie where the bees are coming from.
Photo: Will Nepper

Worse, it seems, can mean several things. When carpenter bees finally abandon the gallery, secondary pests might later infest its tunnels. Scavengers will come to feed on unused pollen and nectar. Worse, certain wasps, ants and other types of bees also will gravitate to old galleries, using them for shelter and nesting sites.

“But what about the females?” the customer asks. “Can they sting?”

“Yes, they do have stingers, but you’re not likely to see them because they stay inside the gallery while the males go out — these guys like to be outside,” Senese says.

This leads the customer to ask, how then, had she seen them inside? Senese explains that if there were any carpenter bees inside, they had most likely flown in through an open screen door or window.

“The females have the brighter, livelier color, and it’s very rare that we see them,” Senese continues. “The female has a lot of yellow on her. But she’s normally in the hole, and that’s where we want to get, to dust them.”

The customer agrees. The three of us walk around the home’s perimeter, searching for more evidence that would indicate carpenter bee activity — particularly, gallery entrance holes. There were only a handful of spots, but they were easy to see and all along where the roofline meets the home’s exterior wall. From Senese’s and Turpin’s trained eyes, it was clear to them both that this was indeed the work of carpenter bees.

After gearing up to work, Turpin fearlessly scales the ladder toward the first hole with duster in hand. 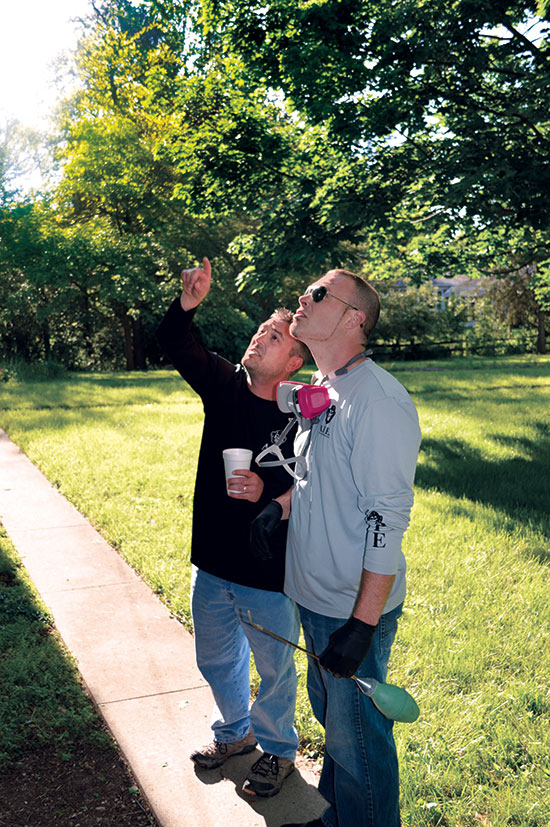 “Oh yeah, this is definitely a carpenter bee entrance,” he confirms. He carefully blows the dust into the hole with the tool.

A carpenter bee’s gallery-entrance hole is typically on the wood surface. It continues in for a short distance before a sharp turn upward, extending the tunnel in the same direction of the wood grain. That’s where the dust needs to get.

After completing the perimeter check and directing Turpin to each place he needs need to dust, Senese asks the customer about the garage-sized coach house he noticed at the far end of the backyard.

“I haven’t seen any bees there,” the woman reports. “But I have seen foxes going in and out from under it.”

“We’ll check it out, too,” he says, before thanking the customer. He tells her that we’ll be done shortly and will let her know before we leave.

As we walk back to the coach house, Senese explains that wildlife control is something that he would like to offer after obtaining the necessary licensing, which he is in the process of pursuing.

“We get plenty of requests, and I’m tired of having to turn them down,” he admits.

When we step up to the backyard structure, Senese takes one look inside and realizes we’ve found the root source of the bees. Evidence along the top of the walls reveals the coach house as the most significant crime scene.

“Well, this is a home run,” he says with a chuckle. “See that frass? That’s from when they’re chewing into the wood — it’s the pulp that they’re pooping out.”

He points to three clearly visible areas around the carriage house roofline before discovering another “home run” on the far end.

“They definitely have four areas of activity on this structure,” Senese says.

Senese grabs a ladder from the truck and scales the side of the coach house so he can feel around along the roof for holes.

“Oh yeah, I can hear them inside there buzzing around,” he says. “That means they’re in there and they’ll be finished when they come out. It looks like we’ve got four more places to treat.” 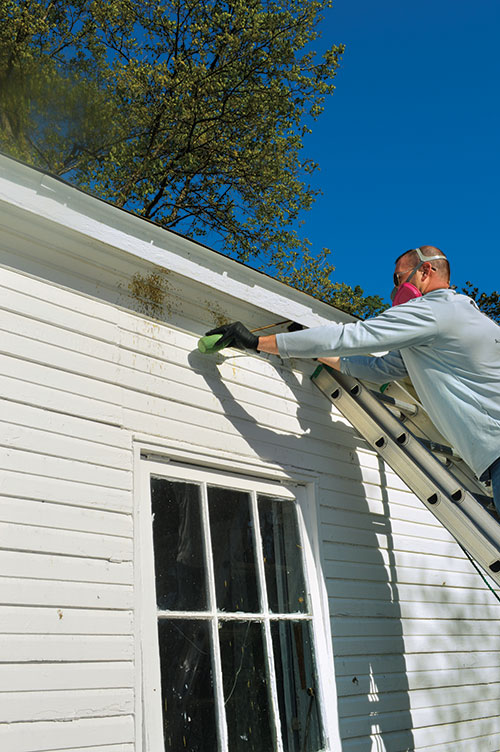 Kenny Turpin dusts the carpenter bee gallery entrance holes under the eaves of the carriage house.
Photo: Will Nepper

The protocol is the same. Dust is A.P.E.’s weapon of choice in these cases, but Senese says he’s interested in trying foam, reminding me that residual is important to prevent callback trips.

“Well, we didn’t see any foxes,” Senese reports to the customer while Turpin loads the equipment back onto the trucks. “But we found a lot more bee activity around the coach house.”

“Don’t worry. We got ’em,” he assures her. “But please call us again if you have any problems or questions.”

The customer, clearly pleased with the efficiency and thoroughness of the A.P.E. team, thanks Senese and Turpin profusely. She looks relieved that her worries have been silenced.

This ride along experience has offered me a sense of relief, too. I do believe it has freed me from my fear of flying stingers.