The saying goes, “to be a fly on the wall,” although flies don’t have ears. Jumping spiders don’t either, but what if they could actually hear you? 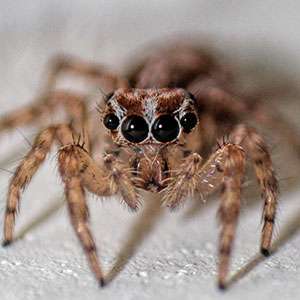 A new study released in Current Biology reveals through neural recordings that jumping spiders’ (Salticidae) brains are capable of responding to sounds up to about 10 ft. away.

Traditionally, the spiders’ reactions are thought to be motivated by sight and touch. Spiders lack ears and eardrums, which are used by most mammals who are capable of long-distance hearing.

The two scientists who discovered the finding, Paul Shamble and Gil Menda of Cornell University, did so on accident while exploring how jumping spiders process visual information.

“One day, Gil was setting up one of these experiments and started recording from an area deeper in the brain than we usually focused on,” Shamble tells researchgate.net. “As he moved away from the spider, his chair squeaked across the floor of the lab. The way we do neural recordings, we set up a speaker so that you can hear when neurons fire —they make this really distinct “pop” sound–and when Gil’s chair squeaked, the neuron we were recording from started popping. He did it again, and the neuron fired again.”

“Paul clapped his hands close to the spider and the neuron fired, as expected,” Menda says. “He then backed up a bit and clapped again, and again the neuron fired. Soon, we were standing outside the recording room, about 3-5 meters from the spider, laughing together, as the neuron continued to respond to our clapping. Based on everything they knew it shouldn’t have been possible, but there it was. It was just the beginning of months and years of work, but it was an incredible start,” Menda says.

The same responses were received by shaking single sensory hairs on the spiders back and forth, which suggests that those hairs are how the spiders are registering sounds from greater distances.