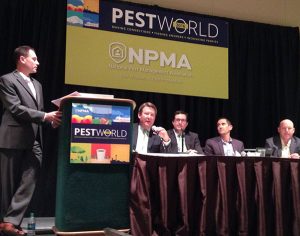 First up was a question regarding the preference for wraps or decals when adding the name of a company to a vehicle.

Jenkins said he uses decals on his company trucks because they offer a “clean, professional look.” The company logo on the back of the trucks is huge, he said, but doesn’t detract from the message that reveals the name of the company and the services it provides. “It’s got to be simple enough for them to read who you are,” said Jenkins. Cost is another reason he opts for decals instead of wraps.

ServiceMaster also uses decals, Bailey said. “Decals allow you to change your branding after a few years,” he explained. Speaking of change, Bailey said the company changed its color scheme, as color can be used to help set a company apart from the competition. “It’s a big marketing decision when you’re choosing colors,” he said.

“A vehicle is a moving billboard,” said Cooper, who trademarked the bright green color on his company’s cars. Whether using decals or wraps, he advised keeping the design simple. Less is more, he said, when using this relatively inexpensive form of marketing.

When asked whether it’s better to buy or lease company vehicles, Jenkins said his company buys because it is “still getting a decent value from buying.” With 120 vehicles in the company’s fleet, he plans purchases in advance so his car dealer can order his vehicles with no frills. “Don’t walk on a [new car] lot and buy a car, because it will have too many features,” Jenkins advised.

Bailey said Terminix leases the thousands of vehicles in its fleet, which makes reporting vehicle costs easier for the publicly owned company. Lemasters advised, “Building a relationship with the people you’re dealing with makes a difference when buying new vehicles.”

Cooper said he has 75 vehicles in his company’s fleet, and he leases them from Enterprise, a company he highly recommended.

All four panelists gave the same answer to the next question, answering in the affirmative when asked whether technicians at their companies are allowed to take their vehicles home at the end of the workday. The reasons varied. Bailey explained the ability to take home the company vehicle is used as a recruitment tool at his company. Lemasters, who mentioned techs who use company vehicles for personal use are covered by insurance, said, “I want someone who sees the same truck around town to think it’s everywhere around town.”

Technology was the subject of the next question. Because ABC Home and Commercial Services has a no texting policy for drivers, the company uses devices from Parrot so they can use their phones hands-free while driving.

For safety purposes, the policy at Terminix is no phones, no Bluetooth and no texting while driving, Bailey said. It uses technology from Mobi to ensure the safety of its technicians.

Lemasters said GPS is used to track its company trucks. For example, the technology shows whether vehicles are moving when they are not supposed to be, he explained.

Cooper’s company also uses GPS to limit a technician’s ability to text while driving, and vowed to use technology that disables the use of a phone and texting as soon as it’s available. He said the use of DriveCam has been invaluable to the company when accidents occurred.

As for answers to a preventive maintenance question, Lemasters and Cooper opt for a mobile lube service that comes to the office and services all the vehicles on the lot on one day.

The session wrapped up with a request for the best advice from each panelist. Jenkins recommended the PMPs in the audience get their tech’s buy in when if comes to vehicles. Cleanliness is important, so he fines workers whose vehicles are dirty. In addition, Jenkins said he spends an hour with every person assigned a vehicle to go over safety. “I make it personal, to impress upon the importance,” he said.

Bailey advised having a plan. “Think about the process you will use to buy vehicles, think about safety and maintenance,” he said. “A fleet is important to your image and your techs, so give it the attention it deserves.”

Lemasters told those in attendance to have a relationship with the car dealer. “Do your due diligence when shopping so you’re ready and will have vehicles when you need them,” he said.

Cooper suggested using company vehicles as moving billboards and recommended maintaining a favorable image. He also advised PMPs to make sure the total cost of vehicle ownership is as low as it can be.