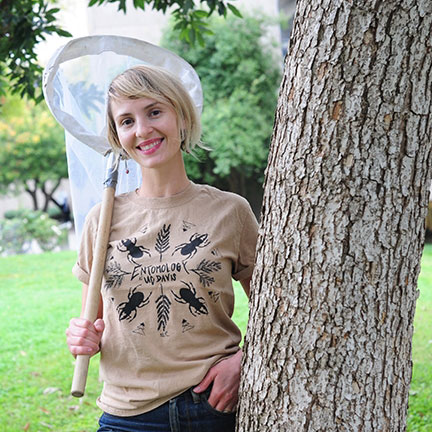 Last year, Rice won with her design of a wasp riding a penny-farthing.

“My art is inspired by the harmony between nature and insects,” she tells the association. “I am truly humbled by the complexity and beauty of many of them! I’m captivated by insects’ structural biology, ability to evolve over time and the intricate ways in which they communicate.”

Rice is a junior specialist in the UC Davis department of entomology and nematology’s Larry Godfrey lab. She received her bachelor’s degree in biological sciences with a minor in medical-veterinary entomology in March 2015, UC Davis says in a blog post.

Rice tells the department her career goal is to become a professional research entomologist, and that she has had an interest in biological sciences since she was a child.

Both of her t-shirts are available for purchase online from the Entomology Graduate Student Association, as well as other winning t-shirts.