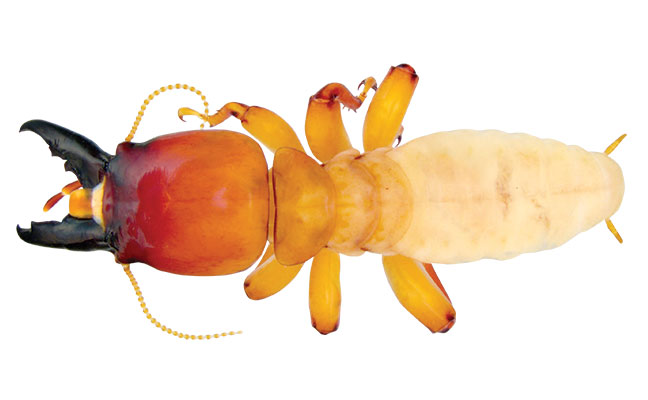 The largest of our native termites, the Pacific dampwood termite, is light brown in its winged form, with dark brown leathery wings. Nymphs are white to cream in color, with a darker abdomen. Swarms are sometimes small, numbering only 50 to 60 individuals from a single colony.

Both male and female swarmers excavate a chamber, enter it and then seal the chamber. They mate and within about two weeks, eggs are laid and the colony is founded. The queen lays about 12 eggs. The second batch is laid the next spring.

They are often associated with decaying wood. They plug the opening in the wood and excavate large galleries, much like drywood termites. However, unlike drywood termites, they do not keep the galleries clean. Their pellets can be found throughout their tunnels in infested wood, although many of the six-sided pellets are discarded from the galleries through small openings in the surface of the wood. Swarmers are attracted to light and are common around streetlights on summer nights. The distribution of this termite is from British Columbia to Mexico — occurring most commonly in the cool, humid coastal areas of Washington and Oregon.

Dampwood termites do not require contact with the soil to obtain moisture; however, wood with a high degree of moisture is needed. That said, although termed a dampwood termite, this species can survive for long periods in dry, sound wood.

It is among the most economically important species among the dampwood termites. Colonies are occasionally carried to other parts of the country in shipments of lumber, but so far it has been unable to become established in these areas.