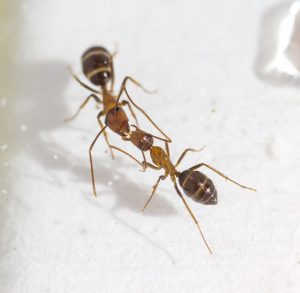 Ants and other social insects such as termites use trophallaxis, or oral fluid exchange, to share food (and baits). But researchers from the University of Lausanne in Switzerland found that trophallaxis in the Florida carpenter ant also regulates growth, development and colony-specific behavioral maturation.

” … trophallaxis occurs in other contexts, such as when an ant is reunited with a nest-mate after isolation,” Richard Benton, one of the lead authors, says in a news release. “We therefore wanted to see if the fluid exchanged by trophallaxis contains molecules that allow ants to pass other chemical messages to each other, and not just food.”

Results of the study, published in the eLife journal, showed non-digestion related proteins were being transferred from adults to their young, including a key developmental hormone. The private communication from adult ants to their young can direct their young’s development, much like how mammals use milk.

“When the ants feed their larvae, they aren’t just feeding them food, they are casting quantitative ballots for their colony, administering different amounts of growth-promoting components to influence the next generation,” adds Dr. Adria LeBoeuf, who led the study.

Social insects frequently engage in oral fluid exchange – trophallaxis – between adults, and between adults and larvae. Although trophallaxis is widely considered a food-sharing mechanism, we hypothesized that endogenous components of this fluid might underlie a novel means of chemical communication between colony members. Through protein and small- molecule mass spectrometry and RNA sequencing, we found that trophallactic fluid in the ant Camponotus floridanus contains a set of specific digestion- and non-digestion related proteins, as well as hydrocarbons, microRNAs, and a key developmental regulator, juvenile hormone. When C. floridanus workers’ food was supplemented with this hormone, the larvae they reared via trophallaxis were twice as likely to complete metamorphosis and became larger workers. Comparison of trophallactic fluid proteins across social insect species revealed that many are regulators of growth, development and behavioral maturation. These results suggest that trophallaxis plays previously unsuspected roles in communication and enables communal control of colony phenotypes.