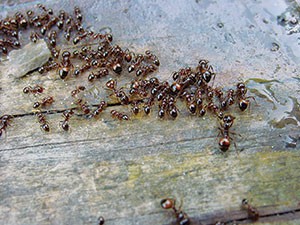 The 10-minute test aims to limit the ants’ spread to the U.S. by testing trucks at inspection stops. Identification currently takes hours, or days, because samples are usually sent to a lab.

The USDA’s Animal and Plant Health Inspection Service (APHIS) implemented a quarantine on red fire ants, who have infested 300 million acres since they were introduced into the U.S. in the 1930s, according to the USDA, who also says control costs and damage in the U.S. is estimated at $6 billion per year.

Agricultural Research Service (ARS) scientists at the Center for Medical, Agricultural and Veterinary Entomology (CMAVE) in Gainesville, Fla., developed the test primarily for APHIS’s use at truck inspection stops, but say it could be used at other locations where cargo is imported or exported.

Entomologist Steven Valles, who works in CMAVE’s Imported Fire Ant and Household Insects Research Unit, developed the novel antibodies that bind to a protein in the fire ant’s venom.

The shows two lines for positive and one line for negative, much like at-home test kits such as pregnancy test.