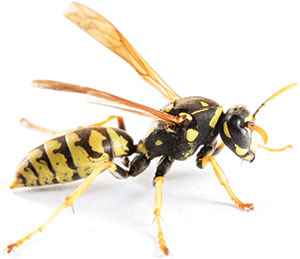 During the cooler months, alarmed clients often observe wasps indoors and call for service. Understanding the biology behind these encounters can help put clients at ease — and limit the number of extra service calls unnecessarily scheduled by well-intentioned technicians and customer service agents.

Many different pest species in the family Vespidae, such as paper wasps and yellowjackets, only survive for a single season. As temperatures cool and day length shortens, male wasps are produced, mating occurs, and future queens set out to start new colonies. Once freezing temperatures arrive, the remaining wasps perish, but the newly mated queens seek warmer, insulated locations to ride out the harsh winter temperatures.

Under natural conditions, mated queens will overwinter inside or beneath logs, loose tree bark or other naturally occurring cracks, crevices or voids to wait out the cold temperatures before founding a new colony in the spring. Structures provide a multitude of overwintering harborage. Locations including insulated spaces inside walls, attics or other voids offer excellent refuge for overwintering queens. In addition, just like boxelder bugs and other overwintering pests, when temperatures warm up, some confused wasps might become active in living spaces rather than head outdoors.

When concerned customers call to report a single wasp clumsily trying to escape a building window, we can reassure them that there is no great cause for alarm because a single wasp is not indicative of an infestation. Overwintering queens typically are not aggressive, and there are rarely more than a few in a structure. Thus, providing the wasp an escape route through an open window may be the only action needed to rid the structure of winter wasps.

Contributor Dr. Jim Fredericks, VP of technical and regulatory affairs for the National Pest Management Association (NPMA), can be reached at jfredericks@pestworld.org.