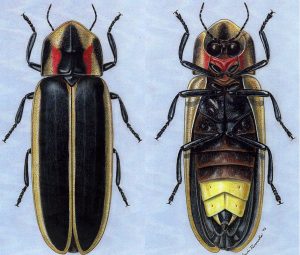 A second grade class in West Lafayette, Indiana, is petitioning for the state to name the Say’s firefly (Pyractomena angulata) its official insect.

The students’ teacher found that in order for it to become an official law, legislators must pass a bill. Amanda Bryden, New Harmony State Historic Site, tells Tristate Homepage the students have been lobbying for the Say’s firefly for the past three years.

“It’s named after a scientist, Thomas Say, who lived in New Harmony in the 1820s and 30s, and he was the first to discover and name this firefly,” Bryden tells the local news outlet.

The entomologist also is known for his contributions to insect taxonomy in the U.S., particularly for his book American Entomology, published in 1825.

“We discussed it at this last Tuesday’s council meeting and seeing that everybody was on board, and we shared with them some of the information that the school students had provided on some of the reasons that not only insects are beneficial, but in particular why Say’s firefly is beneficial and should be designated,” says New Harmony Town Council Member David Flanders.

“It’s native to not only North America and the Midwest, but to Indiana,” Bryden tells Tristate Homepage. “And a lot of the other states that have state insects, their insects are not native to the United States, or even to North America.”

Do you know your home state’s official insect? If not, check this list from the Smithsonian Institution.