When opportunity knocks for this service segment, be sure to open the door.

In a slightly different way than general pest control does, termite management services seem to be capable of giving pest management professionals (PMPs) big-ticket revenue … and solid margins if PMPs can control labor and marketing costs and avoid callbacks.

Pest Management Professional’s (PMP’s) 2017 Termite Management Survey shows that this segment is expected to continue to enjoy steady growth in 2017. It’s just a matter of choosing the optimum strategy — and being smarter with our related sales, inspections and services.

1. Build a reputation among builders. 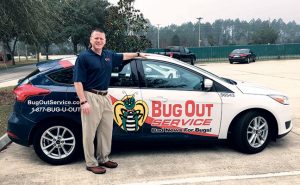 Curtis Rand is regional vice president of Bug Out Service in Saint Augustine, Fla. He names fierce pricing competition as one of his firm’s biggest obstacles in termite work — and he’s not alone; nearly 26 percent of our survey respondents said the same. But Bug Out combats it by focusing on custom homebuilders and commercial construction.

“These types of builders are more focused on an extreme quality of work and a lasting service,” Rand says. “While pre-construction treatments are less than 3 percent of our business, we at least have this as profitable business.”

On the other side of the country, Gene Chafe, vice president of pest control for Senske Services, Kennewick, Wash., reports that the pretreat market isn’t that big in his market, although a few builders are starting to require them.

In San Diego, Payne Pest Management President Jason Payne is focused mostly on drywood termites, as opposed to subterranean species. A rainy January was music to his ears: “All this weather that’s been coming, it’s going to be pulling a lot of ants, and more importantly — a heavy swarm season in the spring,” he says.

San Diego’s housing market has been slowly creeping up, which Payne notes is actually preferable to a sudden spike. “It’s more realistic,” he says, adding that growth in both new construction and housing sales is between 4 percent and 8 percent, depending on the part of the city. “Overall, it’s just a healthier market and things are looking on the up side for the industry as a whole.”

Rand says Bug Out’s opportunities to expand termite management revenue streams also rest with an expansion of its sales force and using a monthly payment model to allow for termite work to be more effectively budgeted by the consumer.

“This type of pricing/payment model also allows for increased customer retention, as there is not a large, once-a-year bill,” he explains. “By making the service a part of the consumer’s monthly budget, we find that the understanding of the service and the value perception are increased.” 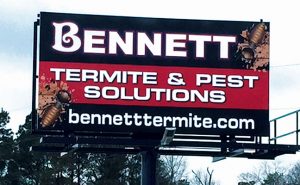 Bennett Termite & Pest Solutions focuses on TV and radio ads, billboards, and some print advertising. Billboards reinforce the message of the other media avenues, notes Dean Bennett, president of the Bishopville, Md.-based firm. But he is careful not to hit drivers with information overload.

“If you’re going 65 mph, I just need you to see the name of the company and the website,” Bennett says.

Cross-promotion of services also is key. When it comes to drywoods in particular, says Payne, it’s important to discuss renewal programs with customers. “A lot of companies don’t push for the recurring revenue, when it can help so much to have an inspection and spot treatments as needed,” he says. “Our renewal inspection routes are among our most profitable, because there’s also a lot of opportunity to cross-sell with general pest control contracts. Part of our state license is for wood repair for termites and fungus, so there’s that opportunity for service as well.”

4. Hire right, from the start.

Bennett stresses the importance of getting the right people in as termite technicians. As with his other two divisions, bed bug and moisture control, they should be detail-oriented and in it for the long haul. Bennett has been in the industry 25 years, his supervisor for 18.

“We’ve hired two new people recently, but otherwise, everyone has been here at least three years,” he says. Interestingly, he notes, it’s worked out that rather than hiring young techs, “We’re all middle-aged, and comfortable in that game.” The higher cost of hiring more-experienced techs, he says, is evened out by increased production margins, and reduced turnover.

To make things easier for everyone involved, each of Bennett’s techs has an iPad. “It’s the ‘Keep it Simple, Stupid’ factor: We email everything to customers, which makes us 100 percent paperless,” he says.

5. Put training at the top.

Ertell Whigham III, branch manager of Pointe Pest Control, Bridgeport, Pa., says while his company is not the least expensive in the market, it stands apart because of the thoroughness of its termite technicians, in both inspections and treatments.

“I think we’ve gotten too complacent as an industry in how we approach termites,” Whigham warns. “At Pointe Pest Control, we’ve brought the old-school approach back. We basically get down to nuts and bolts as far as inspection is concerned. We’re looking, probing the wood, taking a look at what’s actually going on.”

Whigham emphasizes the need to not cut corners in training or equipment: “Give your technicians exactly what they need to do the work appropriately.”

When he was a technician, Whigham says, “I hated going out with bad information. When my sales guys go on inspections, they know to make sure the graphs look good; the measurements are right; and the symbols used on the graphs are appropriate. You can’t simply make assumptions, especially with wood-destroying insects.”

Bug Out’s Rand agrees, pointing out that today’s educated consumers deserve nothing less than knowledgeable, well-trained PMPs. He notes that educating technicians — as well as sales and support staff — is a multi-faceted process, incorporating classes and ongoing training from associations, vendors, industry media and in-house.

“If we only use one source for training, then our knowledge base will be too narrow,” Rand concludes. “Employee development leads to customer retention.”

Tips from the pros

Dean Burnside, Good News Pest Solutions, Nokomis, Fla.: “Talk to existing pest control customers about termite protection. Talk to their neighbors when neighboring treatments are performed. Don’t let warranties lapse or expire without a concerted effort to save the accounts.”

David Hersh, Hersh Exterminating Service, Hermitage, Pa.: “Don’t knock the other guy. Don’t sell solely on price. And when explaining what we do and why we do it, don’t use jargon.”

Alyssa Julien, N Texas Pest Control, Little Elm, Texas: “Show customers the termites, and tell them how they are going to be taken care of. Make sure all questions are answered, and give them time to make up their minds.”

Michael Patton, Patton Termite & Pest Control, Wichita, Kan: “Don’t cheat the customer by being lazy. Inspect and treat thoroughly and be the best you can be. Treat the customer like family.”

Tracy Rice, Rice Pest Control, Anniston, Ala.: “Never assume the customer has no knowledge of the process. Don’t assume every job is a cakewalk — something will always turn up to test you. Don’t leave any wood debris, scraps or other mess in the customer’s crawlspaces, garages, etc.”

Todd Simpson, HTP Termite & Pest Control, Huntingdon, Tenn.: “Create solid, understandable contracts. Say what you do and do what you say. Own your mistakes and make it right.”

Stacey White, Vintage Pest Management, Peoria, Ariz.: “During inspections, move stuff. Get on your hands and knees. Pull the shades up and down. Look like you want to find something, and you most likely will. After a thorough inspection, price accordingly.

Don’t cut your throat trying to get a sale. Sometimes not getting a sale is the best thing to happen to your company.”

While overall, survey respondents were pleased with the outlook for termite management services in 2017, there are always a few challenges to overcome. When asked to rank seven specific obstacles, the majority said fierce pricing competition in their respective markets is the biggest headache inducer. This was followed by a sluggish overall economy, and a lack of termite swarms — although several were quick to point out that educating customers and prospects that termites can exist on their properties without a swarm usually takes care of that issue.

Fourth on their obstacles list was a sluggish home sales market, while the complaint of today’s treatments “work too well for too long” came in fifth. A sluggish new-construction market was not as much of a factor as it’s been in the past, and it was a relief to see “difficulty finding and keeping qualified termite technicans” come in last on the list for most.

Other reported obstacles ranged from the technical (heated floors, slabs on grade, wells, above-ground infestations, changes in landscaping) to the operational (sales and marketing, lack of consumer understanding and/or cooperation). Many noted that the competition was underbidding, leading them to resist the urge to underprice jobs or rush through inspections and treatments to get a decent revenue margin. Raising the return on investment (ROI) on advertising and marketing investments was another complaint.

While we can’t do much about weather conditions or unscrupulous competitors, we can continue to bring you expert advice on how to deal with several of the other technical and business obstacles in future issues of PMP. 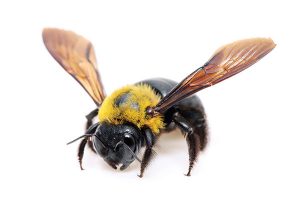 Carpenter bees… in the snow?

One of Ertell Whigham III’s tricks of the trade is to inspect for overwintering carpenter bee larvae and adults in colder months.

“You’d be amazed at how many bees and larvae fall out of the holes,” says Whigham, branch manager of Pointe Pest’s Bridgeport, Pa., location. “It’s good customer service, because not only does it fulfill a need to visit in the winter, but the customer inevitably says ‘I didn’t even know they were in there.’ You’re preventing the bees from getting a head start on damage in the spring.”