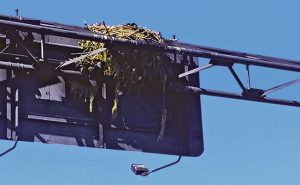 An osprey nest is built on the back of a highway sign.
Photo: Christy Norris

Bird management can be time-consuming, complex work. Sure, it’s relatively easy to remove sparrows and their nests from big box store signs. But when the Tampa Bay Buccaneers want osprey and their nest removed from a 125-ft.-tall light pole at Raymond James Stadium, the degree of difficulty moves up a few notches.

Christy Norris, co-owner of Palmetto, Fla.-based Nuisance Wildlife Removal, has seen her share of challenging situations during her 17 years in the industry. Although rodents account for the majority of the company’s work, birds are second at 30 percent.

“We don’t bite the hand that feeds us,” Norris quips. “We also get referrals from power washing companies. They clean pool cages, for example, but they don’t want to be there every other week removing bird droppings.”

Referrals also come from sign companies, because sparrows are notorious for building nests on signs. Nuisance Wildlife Removal focuses both on getting rid of the bird problem and how to prevent it from reoccurring.

“We do standard residential and commercial bird control, and that can be as small as controlling pigeons and sparrows,” Norris says. “They are not protected birds, so we don’t need to get permits. We can put up deterrents, such as spikes, electrical shock tracks and netting.” 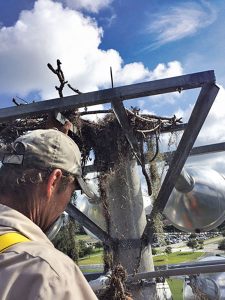 An osprey nest on the top of traditional stadium lights can be a fire hazard.
Photo: Christy Norris

The company also performs bird work that involves protected species such as grackles, osprey, eagles, woodpeckers and hawks. Its crew is used to the legwork involved in pulling the proper permits. As for control measures, Norris says, the crew uses a variety of deterrents to keep these birds away.

At the aforementioned stadium, the osprey (Pandion haliaetus, also known as fish hawks) became a significant problem because its lights would become so hot, they’d light the birds’ nesting material on fire, which would drop into the stadium seats. To solve this problem, “the RayJay” is switching to LED lighting.

On a much smaller scale, Nuisance Wildlife Removal recently dealt with an osprey building a nest on the top of a residential chimney.

“In this case, we had to fly a drone to look at the nest,” Norris says. “We had to make sure it was not an active nest, because you can’t touch an active nest.”

Had it been active, Florida law would have required Nuisance Wildlife Removal to build a platform to the state’s specifications so the osprey could continue nesting. The nesting platform would have to be within 300 yds. of the nest that had been removed. 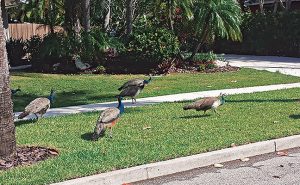 Nuisance Wildlife Removal deals with exotic birds as well. The town of Long Boat Key, Fla., asked the company to chase out dozens of peafowl because they scratch cars, are very loud and (obviously) don’t clean up after themselves. Norris says her crew live-trapped the birds and took them to refuges.

“They certainly don’t stand up for roll call, but originally there were 60 peacocks on Long Boat,” she says. “Some people wanted them in the town, while others would have preferred that they all go away. The town hired us to take care of the problem because the birds had gotten so out of hand.”

Don’t walk away from bird projects

“Don’t turn away bird work,” advises Norris. “All of the suppliers put on great educational seminars. They will teach you how to do bird work, and they will also give you product samples so you can show your customers what you are going to do.”

Norris says most suppliers also will help you measure the work if you have a big job, such as a condo or parking garage.

“A lot of suppliers are just a phone call away,” she adds, noting that it’s always a good idea to run a plan by them if you have even an inkling of doubt. “If you ‘think’ it will work, but it won’t actually work, they will help you figure out a different strategy.”