The exhibit includes a 9-ft. animatronic praying mantis and a monarch butterfly and more than a dozen varieties of live insects and arachnids, including black widows, scorpions, Madagascar hissing cockroaches, darkling beetles and hornworms. Hands-on components include a build-a-bug station, do-it-yourself firefly flash patterns and a climb-in honeycomb.

“The idea is to show insects — especially Oklahoma insects — in a less-than-frightening light,” Oklahoma Museum Network Director Eileen Castle told NewsOK.com. “They’re very interesting. We’ve super-sized them so you can see all the details and things that you would normally miss with your naked eye.”

Castle also said that one of the driving forces behind the exhibit’s design was to make guests feel smaller than the insects they encounter day-in and day-out. 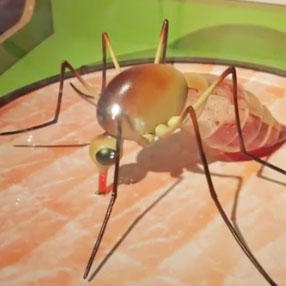