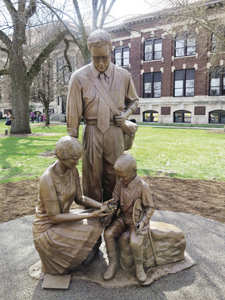 Purdue University now is home to the first statue dedicated to entomologists in the U.S.

Dr. Tom Turpin, a professor of entomology at the West Lafayette, Ind., university, says that there are only two other known statues in the world that honor entomologists. Both are of Jean Henri Fabri and are in France.

“We thought that because of the work of entomologists relative to pest status of some insects and damage that is inflicted on humans and human interest, that such a statue in the U.S. would be a nice tribute to entomologists in the country,” says Dr. Turpin.

The bronze statue, which is titled “The Entomologist,” was created by artist Suzie Chisholm. It resides between the Agriculture Administration building and Pfendler Hall, which for years was the entomology hall.

“It is there because that is the college home of entomology at Purdue, but also because the statue is intended not only to portray entomologists, but also the outreach education/extension mission of Purdue,” says Dr. Turpin.

The statue, which was made possible through funding from both alumni and supporters of the Entomology Department, depicts three individuals who have impacted the entomology industry with their work. The three are observing a tiger swallowtail butterfly, and are depicted at the age each of them would have been had they all met in 1924.

“The statue represents J.J. Davis, who was the second head of entomology at Purdue; John Osmun, the department head that followed J.J., and Rachel Carson, who wasn’t an entomologist, but her work relative to environmental issues had a great impact on research associated with entomology and how insects are managed today,” says Turpin.

Both Prof. Davis and Dr. Osmun are PMP Hall of Famers — class of 2000 and 1997, respectively. While Carson, author of Silent Spring, is a polarizing figure in the professional pest management industry, no less than Dr. Osmun noted in the early 2000s that if not for her work, the industry would not be as professional as it is today.

When reached for comment by PMP Magazine, Dr. Gary Bennett, a Purdue urban pest management professor and 2006 PMP Hall of Famer, says the statue reinforces the important role entomology has in society.

“We all love nature and the role that insects play in our lives, and we as PMPs — and educators — have to keep the public informed of the good and the bad of insects, and how we can protect our health, property and food from the bad insects while protecting our environment at the same time,” he adds. “After all, we do call ourselves ‘guardians of our environment.’”