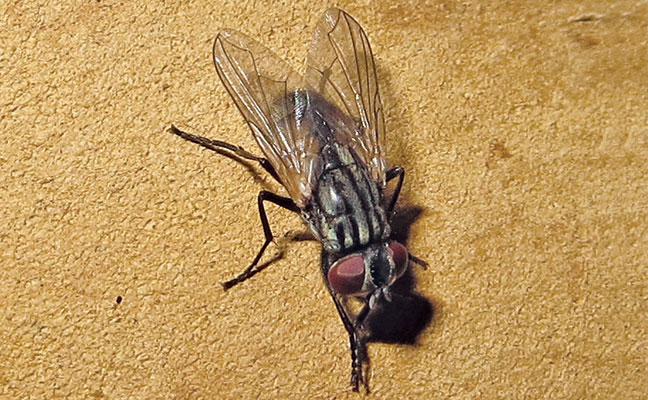 Bonus fact: House flies flap their wings about 190 times per second; to humans, the frequency sounds like a pitch along the F major scale.
Photo: Dr. Gerald Wegner, BCE-Emeritus

Sure, Musca domestica can be annoying as they buzz past your head and around your food. But what’s worse, these filthy, unwanted houseguests may be responsible for transmitting to humans 65 diseases, including typhoid fever, gastroenteritis dysentery, cholera, anthrax, leprosy and tuberculosis.

Viruses, bacteria, protozoa and nematodes cause the diseases house flies spread. These pathogens do not need an insect vector, so house flies — unlike mosquitoes or ticks — are not a key to their transmission. In many cases, house flies simply serve as carriers. They transmit disease organisms because they regurgitate and excrete wherever they land.

House flies feed on fecal matter, moist decaying matter, blood, milk and sugar. They cannot live without water, and usually will die within 24 hours if they go without. They prefer places most humans don’t: dumps, sewers and garbage heaps.

House flies feed only on liquids, and are capable of converting many solid foods into liquid so they can eat them. They suck up liquids, and use their saliva to wet solids to dissolve them enough to ingest. They taste with their feet, which are 10 million times more sensitive to sugar than a human’s tongue.

Adult house flies typically are active during the day, which is when they feed and mate. Adults live two to three weeks, but may live as long as three months when temperatures are cooler, and longer in cool weather.

They deposit their eggs on decaying vegetable matter, compost, grass clippings, garbage, manure and feces. Eggs may hatch into maggots within seven-and-a-half hours if temperatures are higher than 99°F, or within two days if temperatures are around 59°F. Metamorphosis is complete in 14 days at 99°F and 90 days at 59°F.