My brother is an animal genius and wanted me to share it w you guys. He titles this: Trees danger and other animals pic.twitter.com/N21Wr5maqt

A video of a young, aspiring zoologist from Miramar, Fla., has become a fan favorite on Twitter.

The video of “Aiden The Zoologist” showing off his passion for insects and animals was filmed and posted by his older sister, Britney Cooke, on June 5. Since then, the two-minute video has received more than 82,000 retweets and 212,000 likes — Aiden earned a fan base in less than a week.

The video begins with Aiden discussing the ecosystem within a tree, including the insects and plants that live among each other.

“Gnats like to live inside the lichen in the bark that’s on the tree,” he says.

He then educated listeners on the types of ants found on a tree, and lifts a piece of the bark to show the differences between the ants with “huge heads,” the soldiers, as well as the “smaller ants that don’t have big heads or abdomens,” the voyagers.

Aiden says Asian long-horned beetles eat and live inside the tree, and explains how they ended up in North America from Asia.

He was so inspired by the positive responses he made a YouTube channel, gaining more than 21,000 subscribers the first day, according to the DialyMail. Also, Cooke created a GoFundMe account to raise college funds for Aiden, which has reached $2,740 in three days.

“I decided to start a college fund for him early so that he can be set in the future and choose from whatever college he dreams of attending,” Cooke said.

Aiden plans to study zoology in college. But, until then, he will be making more adorable and educational videos for his new YouTube page. 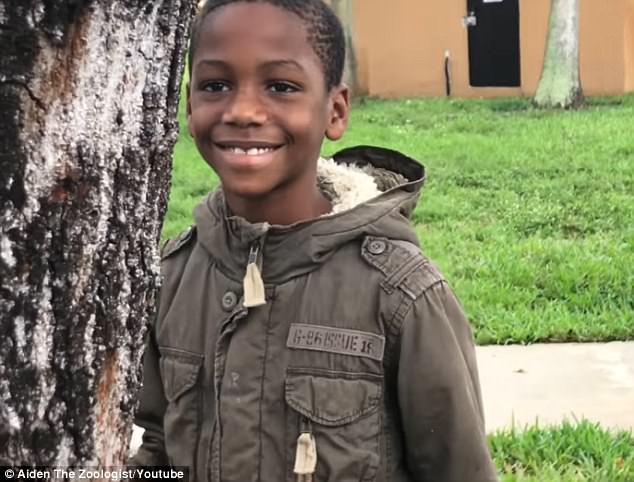