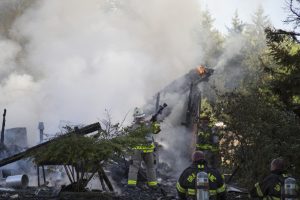 Everyone loves a good fireworks show on the Fourth of July, but for Grand Blanc Township, Mich., homeowner Mike Tingley, the show hit a little too close to home.

Tingley tried to rid his garage of an active bee hive using fireworks — but he ended up burning down the whole building, according to ABC News.

Tingsley’s wife and daughter were in the home when the explosion happened, though the New York Post says no injuries were reported.

“It is depressing losing a place where we had a lot of fun, but everyone is safe and that’s the main thing,” Tingsley said.

Although this family’s backyard may not be the same, it is safe to say their bee problem is fixed.