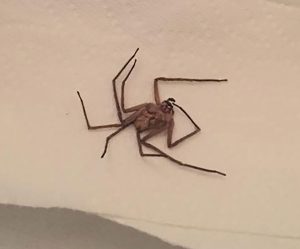 A Michigan mother had a scary start to the summer when she found one of the worlds largest spiders resting in her son’s room in June.

Jillian Duke walked into her son’s room and found what she thought was a ball of string, according to CBS News.

Reports from The New York Post state after she attacked the spider with books and a broom, her father double checked to make sure the arachnid was dead.

“I’m so concerned because it could have hurt or done worse to my child,” Duke wrote in a social media post. “My dad thinks it’s poisonous for sure.”

The family proceeded to take the corpse to a local vet where it was identified as an Australian Huntsman, one of the largest spiders in the world. Although it looks scary, the spider is harmless to human except a potential allergic reaction to its venom.

Authorities estimate the spider landed in Michigan through shipment of produce.