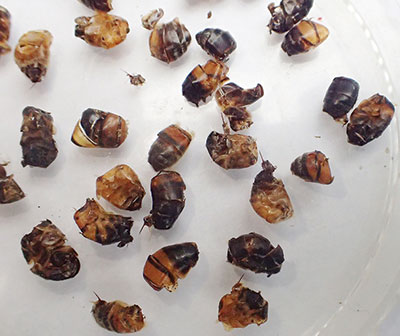 The next time you’re working with a customer on a stinging insect account, consider Kathy Keatley Garvey’s recent blog post, “Why Dead Bees Can Sting,” on the University of California Agriculture and Natural Resources (UC ANR) website. Garvey, a communications specialist with the UC-Davis Department of Entomology and Nematology, relates what happened to her this spring when she stepped on a decapitated honey bee near a patch of Spanish lavender in her pollinator garden.

Garvey was not wearing shoes at the time, but she was wearing heavy socks. She stepped on the discarded remains of a California scrub jay’s lunch and the stinger pierced her socks. When the jays grab a bee, they first “thrash it on the sidewalk, and decapitate it, leaving behind the bee abdomen (complete with stinger),” Garvey says. The stinger is still viable.

Garvey spoke with Dr. Eric Mussen, a UC Cooperative Extension apiculturist emeritus, who confirmed that the nervous system of insects is decentralized enough for this to occur.

“A honey bee sting, even when detached from the bee body — particularly the brain, from a mammalian point of view — can continue to operate, dig the sting in deeper and pump in the venom,” he told Garvey. “So, the still-fresh and functional abdomens of decapitated honey bees can function just as they do when ripped from the body by stinging. It doesn’t matter how the sting gets into your tissue; the exoskeleton, muscles, nerve ganglion, and venom sac act just like they would from a real sting. The trick, in your case, was to step on the abdomen at the perfect angle to push the sting into your skin. From then on, nature took over.”

The moral of the story? It’s a good idea to recommend to customers to always wear shoes in a pollinator garden or where bees are. You can’t prevent birds from picnicking and leaving behind a prickly reminder.