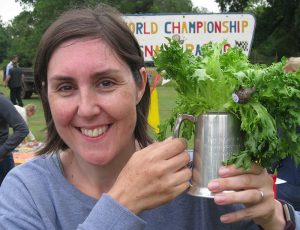 The village of Congham has been hosting the unconventional race for about 50 years. This year, more than 150 garden snails entered the 33-cm. course, according to the New York Times. None, however, were as fast as Larry, who had a final recorded time of 2 minutes and 47 seconds.

Some snails in the race may have “trained” for it, but that was not the case for Larry. Larry’s owner, Tara Beasley, 41, found him in the garden the night before the big race, stated Eastern Daily Express.

“It’s not really sunk in, I kind of entered as a bit of a challenge with my friend and now Larry is a champion. So yeah, it feels great,” Beasley said.

The dynamic duo left together with their trophy, a silver mug filled with lettuce, in hand.

According to the WSRC website, the 2018 event is scheduled for July 21.