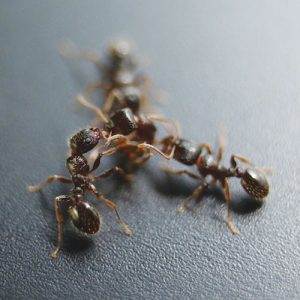 Dr. Michael Greene, associate professor and graduate program director for the University of Colorado Denver Department of Integrative Biology, studies the brains and actions of pavement ants (Tetramorium caespitum) — and theorizes human behavioral tendencies from the findings. As a co-author of a recent study in the peer-reviewed online journal PLOS One, he focuses on how the ants pick up on environmental cues, such as touch and smell, and their resulting actions. Ants also spread information to one another with their antennae, using chemical cues.

For this study, Dr. Greene and his colleagues wanted to determine what happens when pavement ants fight one another — an event that can last up to 14 hours, yet not seriously injure any party (Dr. Greene teases it’s more like a dance-off). They determined that a big factor in choosing a sparring partner was how long ago the two ants had previously interacted.

“Our previous data have shown that isolating an ant for 3 minutes leads to baseline levels of serotonin, octopamine and dopamine,” Dr. Greene tells PMP, noting that because the three chemicals have a direct effect on a pavement ant’s willingness to fight, the team pharmacologically raised the chemicals in different levels to see whether they could mimic social interactions in isolated ants. When they placed the “enhanced” ants in an arena with similarly treated non-nestmates, the ants were fooled into thinking these strangers were neighbors — and when they found a rival for their territory, they were ready to square off. 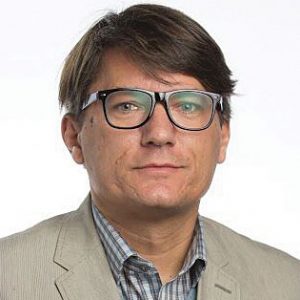 “Pavement ant colonies are rather densely packed into built environments. Pavement ant wars are very common in the spring and early summer in Northern temperate areas, because established colonies are competing with new colonies for territorial space,” Dr. Greene explains. “Given that their food tends to be rather patchy in their territories, defending their territorial area is important. The greater a colony’s territory, the more likely its workers will find food. Increased food consumption will lead to greater production of workers and alates — reproductive ants released during the breeding season.

“As pavement ant workers search their territory for food, they will sometimes encounter non-nestmate ants from neighboring colonies,” Dr. Greene continues. “If the ants recognize each other as non-nestmates, they will fight if they have had a recent history of interactions with their nestmates. Some ants will recruit others to the fight. A war, involving thousands of ants, will then form over an hour or so.”

While Dr. Greene is a biologist, looking to extrapolate the human “mob mentality” and the chemicals in our brains that make that occur, he and his team may have also come across a specific ant species behavior that can help pest management professionals uncover colonies at an account — or at the very least, be able to explain to a client what’s going on when they witness what may be the world’s tiniest West Side Story tryouts.

In addition, the study encountered these behaviors: