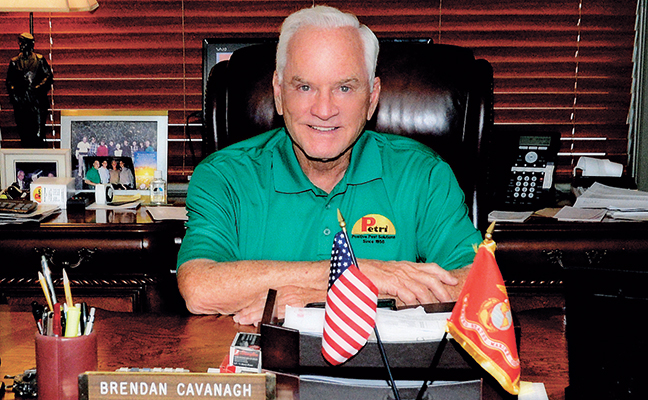 Brendan Cavanagh has been in the Florida market for 45 years, and seen it grow dramatically.
Photo: Petri Pest Control Services

Petri Pest Control Services is growing amid stiff competition in Florida — at about 7 percent each year since 2013. In 2012, company growth was almost 19 percent, thanks to a heavy whitefly season. Buoyed by a profitable summer, it’s forecasted to increase revenue by 13 percent in 2017.

“Not a day goes by where I don’t see another pest control truck I haven’t seen before while driving down the street,” says company President Brendan Cavanagh. “It’s been a competitive market since 1972, the year I came here from New Jersey. We see new pest control companies all the time. There are many small operators.”

There also has been some consolidation in the market. Larger companies have purchased smaller companies. Petri was no exception: Earlier this year, it bought local competitor Complete Pest Control, which generated about $270,000 worth of business annually.

A large percentage of Petri’s revenue is recurring business, which is tied to bi-monthly pest control or lawn spray services that usually occur nine times per year. Approximately 80 percent of its revenue is recurring, whereas the remaining 20 percent is comprised of termite jobs, renewals and other one-time services.

Of the company’s 54 employees, six salespeople remain busy with incoming requests. Petri also has long-term employees, some of whom have been with the company more than 20 years.

Petri spends about 4.5 percent of its revenue on internet and magazine advertising, as well as Angie’s List. Other marketing initiatives include support of Junior Achievement, an organization dedicated to giving young people the knowledge and skills they need for economic success. The company also invests in its fleet of trucks, replacing them after five years.

Petri invests in its employees, too, sending technicians to Pest Management University, a training program sponsored by the University of Florida and the Florida Dept. of Agriculture.

“They come back feeling better about their job and are more involved,” Cavanagh says.

Petri’s growth has been considerable enough that it’s literally running out of space. At press time, Cavanagh and his son, Vice President and General Manager Chris Cavanagh, were pondering whether they should open another office in a different area, such as Palm Beach County, or another building nearby.

Walsh is a Cleveland-based writer. He can be reached at pmpeditor@northcoastmedia.net.