Strike up a conversation with anyone at the Purdue Pest Management Conference and you can’t help but ask, How may years have you been coming here? It’s a valid question, as a luncheon on the third and final day recognizes attendees for the number of years they’ve attended the event. Conference attendance has been tracked for more than 50 years, says Purdue Pest Management Conference Manager Holly Fletcher-Timmons, and it’s a tradition to recognize dedicated attendees. This year, 37 people have been coming to Purdue for more than 25 years. At 59 years, Robert Windler has attended the most Purdue Pest Management Conferences. For attending 25 years, Kevin Connelly, David Edwards, Ben Hicks, Donnie Knight, Phil Nixon and Steve Smith received awards. To mark 10 years of attendance, Masha Fardisi, Kevin Gibson, Bret Lee and Charles McMahon received awards.

The second day of the 82nd annual Purdue Pest Management Conference was as crowded as the first, as pest management professionals (PMPs) seemed eager to learn from experts and, in many cases, earn credits for continuing education. 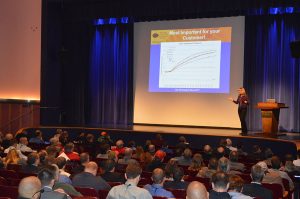 She acknowledged people are “incredibly paranoid about bed bugs.”

And yet bed bugs do not like to stay on us after they are fed, she said. “They are hot, we are hot. They want to go looking for girlfriends,” she quipped.

Bed bugs are especially problematic in multi-unit housing. Because they are difficult to manage, lawsuits are common.

Dr. Miller said when reviewing cases, it is easy to determine that building managers: didn’t know what the pest management companies they hired were actually doing, suggested the residents perform their own treatments to avoid having to pay for it, tried to make residents pay for treatments, made no effort to assess the number of infestations in their building(s), and took no proactive action (like inspections) to prevent infestations.

She cited research that showed protocols consisting of non-chemical control methods – such as monitors, heat and encasements — eliminated the majority of bed bugs.

Bed bugs can be eliminated using “pitfall” traps, she said, and advised PMPs to monitor after each treatment.

The conclusion of one research study that called for the use of two monitors in elderly disabled housing units found no difference when using 2 or 4 “pitfall” traps. It appeared bed bugs died off before an infestation could occur, she said.

Dr. Miller said she places one monitor at the head of the bed and the other near the “best seat in the house.”

“The seat with the best view of the television will always have bed bugs,” she said.

She conducted research of her own in an elderly disabled facility to compare the use of “pitfall” monitors with electronic monitors that use WiFi, a camera, a bed bug attractant and alerts PMPs via smartphone when an insect is caught in the trap. There were benefits to using each, she said.

Dr. Miller concluded her presentation by advising PMPs who work in multi-unit housing to familiarize themselves with the Warranty of Habilitation, a document that guarantees the property is safe, sanitary and structurally stable for humans.

“You absolutely need to discuss it with your customers,” she said.

He explained the law PMPs strive not to violate is the Federal Insecticide Fungicide Rodenticide Act, or FIFRA.

Sheperdigian explained the difference between labels and labeling. Simply put, labels are adhered to the products’ container, whereas labeling refers to the instructions that explain how to properly apply the product.

It is incumbent on the applicator to know how to apply the product.

Always read any precautions listed. These may include “Do not use…,” “Injury may occur if…,” “Do not reapply to…”for example.

Personal protective equipment, or PPE, tells applicators what they must wear when using the product. The U.S. Environmental Protection Agency has a Chemical Category Selection Chart that explains any terminology a PMP may not understand.

Gloves are a good example of PPE that may be needed when applying a product. Sheperdigian said PMPs may need special gloves to apply a product legally as states may require gloves even when labels do not.

Directions for use, gets into the meat of how products are applied, he said.

“Common sense is your best guide, [however] common sense never works if you don’t know what the label says to begin with,” Sheperdigian said.

He advised PMPs to be aware that old labels will differ from new labels. He also discussed the importance of the BEE box, the box on the label designed to explain what PMPs have to do to protect pollinators. In addition, he advised PMPs against calling stinging insects by the wrong name; yellow jackets, wasps, and hornets are not bees and referring to them as such can get PMPs into trouble with state agencies.

Its important PMPs read the full label before using any product, he said.
“Do not use the product unless you have read the product in full first,” he advised. “Labels change regularly, so read them. Don’t memorize labels, read them, regularly.”

Later in the day, Sheperdigian led a session about ants that included basic biology.

There are 16,000 species of ants, he said. Pavement ants, odorous house ants and pharaoh ants are among the most common. The tawny crazy ant is becoming more prevalent.

PMPs who come across an ant they cannot identify should send it to someone who can provide a proper ID. Then, they should keep a sample of what they sent out so they can compare it the next time they see it.

Because proper identification is important, Sheperdigian suggested PMPs get a microscope that fits on a smartphone or plugs into a laptop.

It certainly would come in handy. For example, field ants look like carpenter ants, but the thorax is different, he said. Field ants nest in the ground, not in trees or wood. “Field ants are not difficult to control,” he explained. “Any product labeled for ants will take care of field ants.”

On the other hand, Hypoponera is a type of ant that is difficult to get rid of, Sheperdigian said. They most often are found in large facilities. They eat small fly larvae, so their presence usually is related to an issue with small flies.

Ants are special because they are social, he said. Social insects do not go out on their own; instead, they hang out together.

When checking for ants, he suggested PMPs start out by surveying the building, and putting out little cards with honey on them to see where the honey was eaten or covered with ants. Then, they will know where to put the bait.

Although Sheperdigian packs his presentations with plenty of useful information, he’s also good at lightening the mood. This time, he asked attendees: Why don’t anteaters get sick? Because they are full of antibodies. Get it?

Despite the icy conditions in West Lafayette, Ind., Purdue University kicked off its 82nd annual Pest Management Conference Jan. 8, with morning educational sessions for technicians only.

Attendance was high for Bobby Corrigan’s discussion of rodent biology. He offered a general overview of rodent behavior and tips on how to best manage them and avoid callbacks.

The rodent control services a PMP offers will only be as good as the observations a PMP makes about the rodents’ specific behavior at a specific site.

Customers can, and often do, purchase traps themselves.  Simply placing baits and traps in a home or business is not what they should be paying for.

“Customers are paying you for your knowledge,” he said. “You know what’s going on.”

The baits and traps are not as important as knowing where to place them.

Corrigan said rodents are gymnasts; some don’t even touch the ground, a point he illustrated with images. That’s why Placing baits and traps on the floor won’t always be effective.

“You must set the right number of rodent traps — and set them correctly — if you don’t want callbacks,” Corrigan said.

Check shadows and corners for signs of rodents. Consider gaps in doors as entry points, too. Determine how and where rodents squeeze into structural cracks, crevices and cavities.

“Train yourself to see what others overlook,” Corrigan said.

Next up was another session strictly for technicians. Univar’s Sales Administrative Manager Mike Corbitt focused on cockroaches.

He offered an overview of cockroach control strategies through history. A quote from Truman’s Scientific Guide to Pest Management Operations, still holds true today:
“The operator must learn to know their hiding places and there is no substitute for a thorough inspection of the premises.”

PMPs have been talking about resistance for nearly 60 years.

“We’ve forgotten how to do cockroach control, and we need to review the basics,” he said.

Corbitt explained the characteristics cockroaches have, giving PMPs a better understanding of cockroach behavior. For instance, he explained cockroaches will eat their own fecal droppings and those of other roaches. They also will eat dead insects, including other cockroaches.

Once introduced into an environment, roaches find what they need in the first 2 to 5 minutes, and cockroaches travel 12 feet or less to feed. Knowing these characteristics can be helpful when planning a cockroach management strategy.

He also covered Treatment techniques and tools, as well as treatments using gel baits and chemical, dust and granular products.

“All these products let you change up your cockroach management,” Corbitt explained.

AP&G’s Dr. Stan Cope led a session entitled “Diseases at the Doorstep.” He told attendees it’s only been 137 years that we’ve known germs cause illness.

Even the reason for the spread of yellow fever — mosquitoes — was a relatively recent discovery, in 1901.

Now, tick borne diseases are a major concern, particularly in New England states. He noted the U.S Centers for Disease Control and Prevention acknowledges there may be more cases than the 30,000 reported; the number may be as high as 300,000.

New insect-borne diseases are constantly being reported. Cope stressed the importance of PMPs when it comes to protecting public health and welfare, and urged attendees to remain diligent.

“We’ve accomplished a lot of things but there’s still a lot to do in our given field,” Cope said.

The final speaker of the Pest Management Conference was Bobby Corrigan, who examined the “State of the Union” of rodents.

“It’s about public health,” he said. “With rodents, that’s a big deal.”

Corrigan shared his experience with using dry ice to manage rats in New York City and Boston, Mass. It is not a new rodent control option, as it was used in England in the 1920s and 1930s.

He tested its use for two years, and is convinced it is a “game changer” when it comes to rat control. It is highly effective, fast-acting, environmentally-safe, humane, simple to use, and poses no threat to Hawks and other raptors. Perhaps most importantly, the parasites found on rats — fleas, ticks and lice — die with the rats and remain underground.

The group photo tradition continues as a photographer lines up attendees outside the Steward Center. Photo: PMP staff

PMPs check out the Nisus booth at the exhibit hall. Photo: PMP staff

ServicePro’s ServSuite software was the highlight of its booth. Photo: PMP staff