Editor’s Note: The “Photo Finish” in the January issue of PMP Magazine introduced readers to John Jarvis — termite inspector for Clark Pest Control’s Santa Rosa, Calif., branch by day, and Captain America by… some ComicCon and other scheduled public appearances as they arise. PMP Contributor Jeff Fenner captured an interview with Clark’s Cap’n, and in addition to the insights provided in our January issue, goes into more depth here:

PMP: What did it mean to you to be able to give back to the community and bring some happiness to the kids? 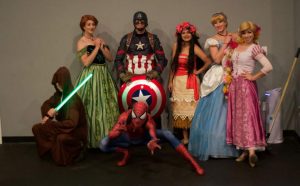 Jarvis: I’ve helped lots of people with pest issues for a very long time. On the morning of the fires (Oct. 8, 2017), my heart sank when I opened the windows to see the skyline on fire. What other families went through that morning was terrifying. I thought about what that must have been like for the children. That’s the kind of stuff that only happens in movies. Dressing up as Captain America meant I could give these children a moment to not be afraid. It meant being a superhero for this awful “movie” we were stuck in.

PMP: What was their reaction to you and the others arriving in costume?

Jarvis: I joined a small, non-profit organization called Hope Love and Magic during the fires. We went to several shelters and when we would arrive, smiles would instantly begin to show.

PMP: How did you become a Captain America fan?

Jarvis: When the first Captain America movie came out, I wanted to know more about him. I’ve been reading comic books since I was a kid. I was always busy reading other titles to read about the Avengers or Captain America. He’s a good guy, always trying to do the right thing. I can relate to that.