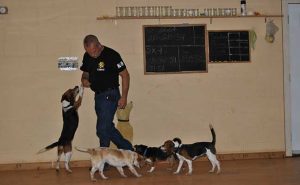 Note the dog trying to make eye contact with the author during a training session.

Last week, I defined what randomized, double blind testing is for testing detection dogs, including those trained for bed bug and termite inspections. Now, let’s go a little more deeply into the technical basis for using this testing method over traditional testing.

I have long had concerns about traditional detector dog team testing and reliability, as there’s always someone in the room who knows where the scent is hidden and can subtly influence the dog, even when not meaning to. Those fears were confirmed in a 2011 study conducted by Drs. Lisa Lit, Julie Schweitzer and Anita Oberbauer at the University of California, Davis: “Handler Beliefs Affect Scent Detection Dog Outcomes.”

In this study, Dr. Lit and her team found that detector dog handlers can exert a great deal of influence, and even exert effective control over where the dog chooses to alert, regardless to whether the target odor is present. This control can certainly be unintentional, but it’s important to evaluate whether the handler is exerting such control.

This study found that detector dogs would perform trained alerts in areas where handlers believed the target odor should be found, even if no such odor was actually present. The study showed that, if the handler gets information, from whatever source, about the correct solution to the test problem, he or she can influence the dog’s behavior. Other research studies also have proven that dogs have the ability to follow the human gaze. This ability relates to domestication, and is a demonstrable and measurable capability. A dog’s ability to follow our gaze is comparable to a human infant’s ability to do so. Wolves, monkeys — no other animals share this ability. According to canine behavior experts, related to the close relationship we have formed with dogs. The point is, that observers could, even inadvertently, offer the dog a cue as to which areas in the room are important and conversely, the observers pointedly ignoring the entire room could offer a seasoned dog a cue that the room is blank. See the 2001 study done by Drs. Hiromi Kobayashi and Shiro Kohshima of the Tokyo Institute of Technology, and the 2017 study done by Dr. Ana Kis and her research team.

If dogs can read the cognitive intent of the direction of our gaze, it’s reasonable to assume that they can read cues that are even less subtle, such as body language. We need to guard against that when administering proficiency testing. It’s why I advocate for double blind testing: No one in the room knows where the source is, so no one can influence the dog — unintentionally or otherwise.

Next week, I’ll discuss some of the objections I’ve heard raised to double blind testing. In the meantime, if you’d like to learn more about the non-profit organization I founded, the World Detector Dog Organization (WDDO) and randomized, double blind testing, please visit WDDO.org. You’re also invited to join WDDO as a member and attend our April 5-7, 2018 conference, the details of which can be found here. If you have comments or questions about this post, please sound off in the comments section or email me directly at latimer_david@yahoo.com.