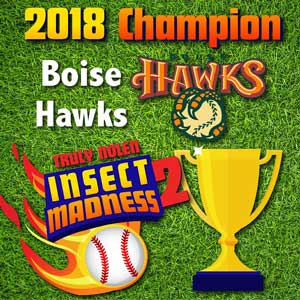 In March 2016, Truly Nolen Pest Control created the TRULY Insect Madness Bracket of Insects, which featured 16 insects and mirrored the fun of the yearly NCAA Men’s and Women’s Basketball Tournaments. After the fourth-seeded Ladybug was voted by our Facebook fans as the Champion, we were happy to have done something that was considered unique for the pest control industry.

One year later, our company’s corporate marketing department opted to touch upon another March sports tradition: Baseball spring training. As a result, we created our first-ever TRULY #SpringTraining #BattleoftheBugs, which included two of our company’s entomologists creating rosters of insects that included the nine traditional baseball positions (P, C, 1B, 2B, 3B, SS, LF, CF, RF), one designated hitter, one relief pitcher, one bench player, and a manager.

Rather than using Facebook for voting, our company decided a panel of three sports media veterans who frequently use Twitter would be the better avenue in terms of keeping the momentum going. The panel crowned Scott’s Sluggers as the champion (based on the scoring system that was used) and an All-Star team was also chosen. Again, we were happy to have done something unique for our industry.

As our company celebrates its 80th anniversary this year, though, we wanted to raise the bar on what we had done in 2016 and 2017. With #InsectMadness2, we believe we did precisely that!

Putting it all together

After a brainstorm among our team, we decided using the tournament bracket format, a March sports fixture, with minor league baseball teams named after insects, rodents or predators that eat insects had potential. The question was whether the teams we targeted through our invitations (which asked for their permission and logo) would be interested in joining us on this wild ride. We were delighted when the Columbia Fireflies became the first team to commit to doing so. Following them, 13 more teams joined the party:

To have 14 of the 16 teams we targeted become part of the bracket was a better percentage then we could have ever hoped for, and we thank each of the 14 teams for taking a chance on something so unique.

The bracket was then built out to have an Insect/Rodent side featuring six of the teams and a Predator side featuring the other eight teams. By the luck of the draw, the New Britain Bees and Burlington Bees received first-round byes. Our Facebook fans were solely responsible for advancing the teams by voting for whom they liked more. With each head-to-head battle, we worked hard to include fun facts about each team’s insect, rodent or predator, links to each team’s website, where fans in their area could purchase tickets to actual games.

In the semifinals, the GreenJackets defeated the Flying Squirrels and the Hawks defeated the Tortugas. In the Finals, after a spirited battle, the Hawks were crowned 2018 TRULY Insect Madness 2 Champions!

With each head-to-head battle, we worked hard to include links to each team’s website, where fans in their area could purchase tickets to upcoming games. One thing that certainly helped them throughout the tournament was their social media team’s consistent sharing of our Facebook posts with their fans. We were extremely flattered so many of the teams took it upon themselves to share our material.

The grass behind the bracket, which is a true sign of baseball season, was the brainchild of Truly Nolen Graphic Designer Cecelia Fleishman, who also made the graphics for Insect Madness in 2016 and Spring Training Battle of the Bugs in 2017. While the team’s logos were obviously the centerpiece of each bracket and head-to-head matchup, Fleishman wanted to pick something that would be both aesthetically pleasing as well as unique to the bracket format. She absolutely accomplished that. Of course, it is always a great feeling to have the full support of Michelle Nolen Senner, our director of public relations, on unique ideas such as this, and for that I am always grateful.

In closing, we had hoped this year’s competition would meet two objectives when it ended. First, because our company’s logo has ears and a tail, we feel like we are certainly able to marry sports seamlessly into our philosophy of having fun. Second, our hope is that in addition to talking minor league baseball, we would be able to provide some interesting insect education to our Facebook fans and Twitter followers including unique insects and predators they may not otherwise regularly see.

While we are not sure what 2019’s competition will look like, we have the luxury of 11 months of planning for our next opportunity to do something different in March!