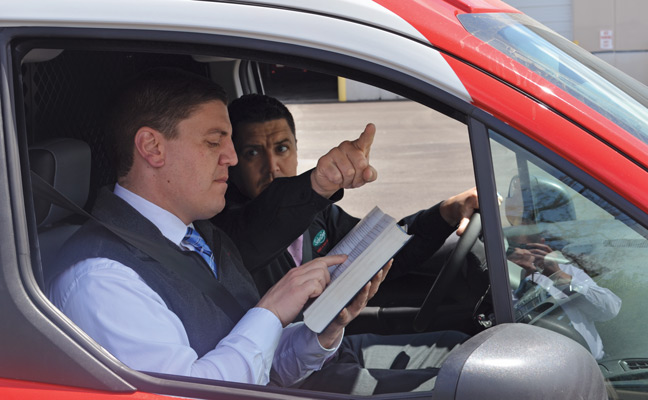 Textbook vs. field training: Kurt and Eric Scherzinger opt for a hybrid of textbook and on-the-job training, but usually not at the same time.

ERIC: Kurt, why are we having this debate? I thought we had been over this multiple times about how important classroom, which involves textbooks, training is. In college, we worked out of textbooks; we didn’t do field training. There are too many variables that get thrown in the mix when you do field training. The best thing to do is get everyone trained the same way out of a textbook so there aren’t gray areas.

KURT: Just how long have you been out of the field? “No gray areas?” Really? Pest control has tons of gray areas, and there are a lot of conditions you can’t teach out of a book. To capture something out of a book and try to take it into a real-life situation is tough. And not just taking care of the pest, but also how to interact with customers. That is why field training is, by far, the best. How big do you want the textbook to be? It would take a huge textbook to capture all of the situations you could run into. For example, what happens when a customer has a newborn baby, children or pets? What about when you can’t find where an ant colony is coming from? The list goes on and on.

ERIC: Easy! Those things can be easily explained in a textbook.

KURT: You’re missing the point. How often do you see two houses that look exactly the same and have the exact same conditions?

ERIC: Well… spec houses! But you’re right; everyone lives differently and has different landscaping. I guess no two restaurants are the same, either. You know — some restaurants are spotless and then there are the ones we would never eat at.

KURT: See? There are so many obstacles and different circumstances you run into in the field, you can’t possibly train only out of a textbook.

ERIC: OK, I see what you are saying, but what about our debate in the March issue, where you were saying virtual reality was the way to go?

KURT: That is an important tool that is more like in-the-field training. It’s not reading out of a boring textbook. I mean, come on, you know how you learn best — hands-on.

ERIC: OK, OK, you make a good point. I just want to make sure everyone is on the same page. Not having a tangible metric of training worries me. Like I said in March, that is why classroom training is so important. It equips the techs with the knowledge they need to go do their jobs.

KURT: I’ll give it to you that for the state pesticide license test, yes, training in a classroom with a textbook is probably needed. And a textbook can be a good reference to confirm a hunch for identification, for example. But to train on our processes and protocol — you can’t teach that in a classroom in a textbook. We can write down bullet points and go over them, but it is putting them into action and arming the techs with the knowledge to figure it out. We would never get techs out of training if we trained them out of a textbook for every possible situation they could run into.

ERIC: I guess you’re right again. We can use a hybrid then, right? We have to train out of the textbook a little bit, but ultimately being out in the field with the techs is what is going to give them the best training.

KURT: Once again, it’s starting to sink in with you … finally.