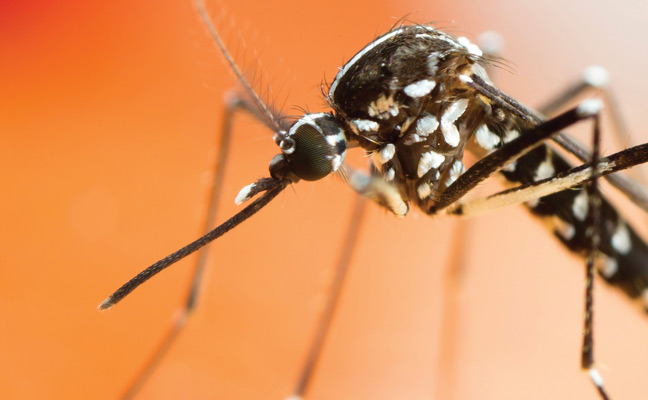 The Asian tiger mosquito is a known carrier of West Nile virus, yellow fever and other illnesses. Photo: iStock/gordzam

At the University of Florida, mosquito control is an important issue for Dr. Phil Koehler, an Endowed Professor of Entomology and a PMP Hall of Famer (Class of 2015). He and his team recently released a study examining the benefits of tank mixing Syngenta’s Demand CS insecticide, containing lambda-cyhalothrin, with its larvicide product Archer, containing the insect growth regulator (IGR) pyriproxyfen.

“Many pest management companies don’t consider using larvicides because they think only in terms of adulticides,” Dr. Koehler says. “We found that if you apply an adulticide and larvicide at the same time, it worked better in the end. The adulticide knocks down the adult population, and the larvicide keeps them from returning.”

Dr. Koehler says this approach embodies the concept of integrated pest management (IPM), addressing all the life stages of a mosquito.

Pest management professionals (PMPs) who perform mosquito work often run into two big water concerns, Dr. Koehler says: keeping drinking water safe and minimizing pesticide runoff into aquatic habitats. There’s also the concern of resistance to certain pesticides, although Dr. Koehler points out there has been no documented resistance to IGRs. In the study, he says, the risk to water is kept to a minimum because of the low amount of active ingredient required in the adulticide and larvicide/IGR combination.

“It doesn’t take much product to kill the larvae — the active can be measured in parts per billion,” he says. Misting the combination of products with a backpack blower is also less labor-intensive than some other treatments, he says — so much so that in addition to the undersides of leaves, it can be used in places PMPs might otherwise overlook. For example, Dr. Koehler says, the U.S. Centers for Disease Control and Prevention directs consumers to “empty all the containers on a property, so mosquitoes won’t breed.”

“But they don’t tell people to scrub the edges of every container to remove mosquito eggs,” he continues. “In Florida, it basically rains every day. They need to empty every container one to two times a week, and people get lazy. Whereas, it’s possible to control the risk of mosquito breeding sites with an IGR. And the low amounts of active won’t affect the birds in a bird bath, for example.”

An IGR affects the last larval stage of the mosquito, and thus the emergence of pupae. Spraying the mist on all the containers and at-risk areas in a yard will control the adults and the larval stages, and even knock down the eggs.

Another benefit of this type of treatment, Dr. Koehler and his team found, is that the adulticide component can help manage migrating mosquitoes. “Not all mosquitoes are coming from containers,” he points out. “Some are traveling in.”

In the study, mist spray treatment occurred every eight weeks, with virtually 100 percent control of the Asian tiger mosquito (Aedes albopictus). However, a PMP the team worked with reported great results even after 12 weeks.

“He had been treating residences every week before,” Dr. Koehler says, “so he was very grateful to have this treatment option. I don’t know that I’d suggest quarterly service, but every two months is very feasible.”

This approach is going to take some customer education, Dr. Koehler says, as they may expect to see a tech in their yard every week.

The study took place last summer in a Gainesville, Fla., residential neighborhood, with a population sample of 20 homes with approximately a quarter-acre property apiece.