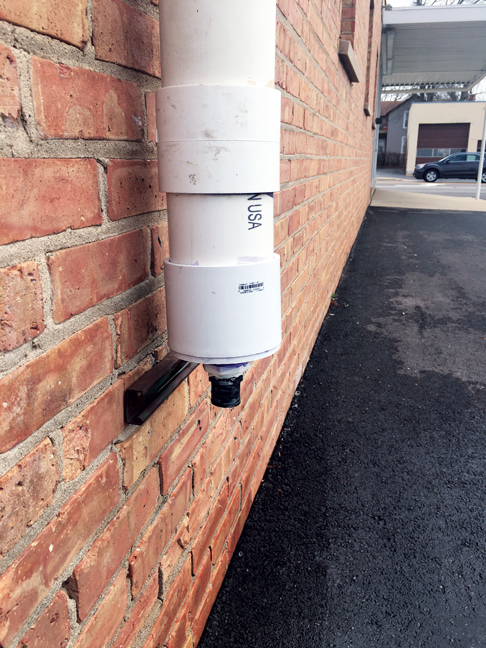 A workaround solution for our downspout problem helped for a little while — until the city inspector came by and had other ideas. PHOTO: Pete Schopen

Last time, I explained how our new Schopen Pest Solutions building was inundated with water — thanks to bad sewer lines, a leaky roof, lack of drainage in our garage and an epic ice dam in our parking lot. It was a rough winter for us, battling the rain and snow. One by one, though, we’ve been attempting to address these problems.

Our building was formerly a rundown grocery store and deli. Years of dumping grease down the drains clogged up the works. It really is no different than people eating greasy hamburgers their entire lives and blocking their arteries.

In December, we had the drains “jet cleaned.” It worked for about two months. Unfortunately, years of grease are still clinging to the sides of the pipes. Mix the lard with old, corroded pipes, and the toilet paper started to block the pipes again in March.

We have a situation that will never be resolved, no matter how many times the lines are cleaned. Therefore, we are going to have polyvinyl chloride (PVC) liners put into the system this summer. It’s akin to putting stents into your arteries after a heart attack: The plumbers will not replace the current pipes, but will force a liner into the drains that will cover the grease and make the old pipes work better.

In Chicago, we get a lot of snow. During the winter, when our guys store their trucks in the garage, the snow melts and the floors flood. We did have a “pit” in the garage that collected the water, but I hated it. I had it cemented over and then covered with epoxy flooring. The epoxy flooring worked great! The garage looked wonderful. But the epoxy was so good that the water sat in the garage — and eventually flowed into my manager’s office.

We also have drainage problems on the roof, and they won’t be an easy fix. The roofers have been to our building several times, and the roof still leaks. The good news is that our roof is under warranty through the end of August. I will just keep harassing my general contractor until the problem is resolved. The worst-case-scenario is that I have to put a new roof on my building three years ahead of schedule.

Unfortunately, our roof drains into a PVC pipe that starts in the center of the building and runs south, through the service garage. It empties into a downspout about 6 ft. off of the ground. This downspout fills our parking lot with water, which is not a big deal for 10 months out of the year. But in January and February, the snow on the roof melts because of the heat coming off of the building. This creates an ice river in our parking lot. It is dangerous!

One of my techs came up with an ingenious idea: He used black tubing and connected it to the downspout. He ran the tubing along the base of our building into a sewer drain — we removed the metal cap off the drain and stuck the tube inside. His fix immediately improved our parking lot.

A city inspector wasn’t pleased with our solution, though, because the water was being run into the sewer instead of the rainwater drain. The difference is that the rainwater drain runs directly into the Fox River. The sewer goes into the water reclamation plant. Thus, the city deemed our excess water as an “unreasonable” amount of water being processed through its facilities. Because it’s warm out again, we removed our tubing. Next January, we will run the tubing all the way to the street.

It can be frustrating when you hire employees and buy property because, at the end of the day, most of us just want to be pest professionals and not deal with outside problems. But as I grow my business, I am moving further away from pest control and closer toward managing employees, vehicles, equipment, building issues and marketing. Very little of what I do these days actually involves pest control, and that makes me sad. I love being an exterminator. Even though there are rewards to it, too, it’s taking a lot of my patience to transition from “bug guy” to “business owner.”