Check the bugs for bugs 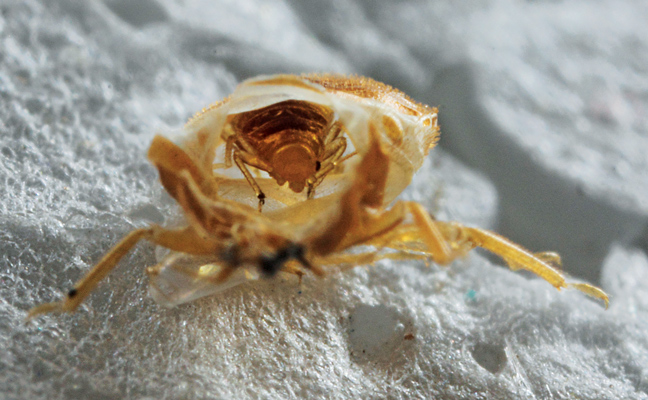 A first in-star bed bug doesn’t always have a whole lot of hiding options, so a cast skin of an older relative will do in a pinch. PHOTO: Mark Vanderwerp, BCE

⦁ Vacuuming all evidence, as well as live bugs, is worth the effort.

Bed bugs (Cimex lectularius) can’t fly, but they do have some surprising tricks. A common refuge for first-instar bed bugs is inside the cast skins of larger bed bugs. If you don’t think so, get a handful of exuvia from an active infestation and start checking.

I learned this during a Take Your Daughter to Work Day. I was entertaining several bright young girls by letting them examine cast skins under a microscope when one of them proclaimed, “I see a live one!”

“No, they’re not alive,” I responded, but she insisted. Upon examination, I realized she was right. From inside a cast skin, a tiny bed bug had emerged to amuse the children and confound the entomologist.

I put the young one to the sword for its ambition (the bug, not the daughter). Back then, a live bed bug loose in your office could put you off your feed. Now, I figure it’s all part of the job.

The virtues of vacuuming

We’ve all seen cast skins fly around, but have we considered that some of them might be carrying a tiny refugee? This just reinforces the value of vacuuming before a treatment. When you increase the number of bugs that survive the application, you up the odds for a rebound. Heat treatments should be effective against these little stowaways, but it’s even better to suck them all up at the outset and be done with it.

A single, first-instar nymph cannot start an infestation by itself, but there’s almost always more than one. And if you consider those locations where the population has exploded, you can easily imagine how many chances could be blowin’ in the wind.

This has caused a world of confusion for scent detection teams, who have to use dead bed bugs and cast skins to train the dogs not to alert on old evidence. A vial of old cast skins may be hiding a live bug or two inside. The wise handlers heat their dead bug evidence just to make sure no one is playing possum. During a search, a dog will often alert, and the subsequent search turns up old evidence, but no live bugs. This behavior might explain a lot of them.

If you had to “unzip” all those “sleeping bags” and look inside, you might be there forever.