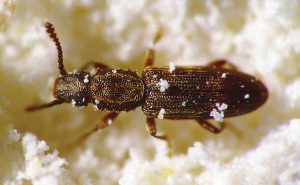 The sawtoothed grain beetle is one of many species of grain beetles. Photo courtesy of, and copyrighted by, Gene White, pmimages@earthlink.net

Spend a day at the ballpark and if you’re lucky, you will experience memorable moments like back-to-back home runs and walk-off doubles. If you’re unlucky, you will bring home a giveaway infested with pests.

Before the game was over, the San Diego Padres, which lost to the Colorado Rockies that night, asked fans to swap their hats for vouchers for new, pest-free beach hats. Fans who left the game hat-in-hand were advised to discard them and contact the team for a replacement, according to the San Diego Padre’s official Twitter feed.

The pests were discovered during the game, and the San Diego Padres immediately issued an official statement that read, in part: “During the distribution of tonight’s beach hat giveaway, it was discovered that some packaging contained what independent expert believe to be grain beetles. We have been advised that grain beetles pose no health risks to humans, but we decided to act out of an abundance of caution.”

The San Diego Padres’ statement is correct; grain beetles do not pose a health risk. Left unchecked, however, fans could find an infestation in their pantries.

Grain beetles feast on foods made with grain, such as flour, pasta and cereal. They also like meat, nuts, candy, dried fruit and dog food. Often these pests enter packaging at the factories, warehouses and stores where foods are made, stored and sold. This may have been the case with the beach hat giveaway, as the pests were found in the packaging.

Updated statement from the Padres regarding tonight’s giveaway: pic.twitter.com/6zPfApz7BO