2019 State of the Industry survey: Become a PMP kingpin

Pest management professionals (PMPs) are at the top of their game this year, and it appears the winning streak will continue through next year.

An overwhelming majority of the 159 PMPs who answered our 2019 State of the Industry survey say they are looking forward to another great year. When asked to rate on a scale of one to five stars how well the pest management industry will perform next year, 88 percent chose four or five stars. It’s no wonder PMPs give high marks to the pest management industry. More than three-fourths of PMPs expect revenue and profits will be up in the year ahead. Ants, cockroaches, termites, bed bugs and rodents remain top revenue generators for the majority of PMPs who responded to our survey. Respondents also project high customer and employee retention rates, key indicators of a good year ahead.

“We actually expect every year to be a banner year,” says Del Lawson, vice president, Modern Pest Control, Katy, Texas. “With the knowledge we gather each year, we improve our processes and our people. That gives us an edge that allows us to feel as though every month will be our ‘best one ever.’”

Modern Pest Control has been in business 66 years, and it is known as an early adopter of technology and add-on services. But because pest control is the company’s focus, the services it adds are complementary. “A lot of pest control companies became water damage and mold experts in our area after Hurricane Harvey last year,” Lawson says. “But we know our focus is pest control, and work to expand upon that. New services will have an impact on revenue, but likely will not be a driving force.” 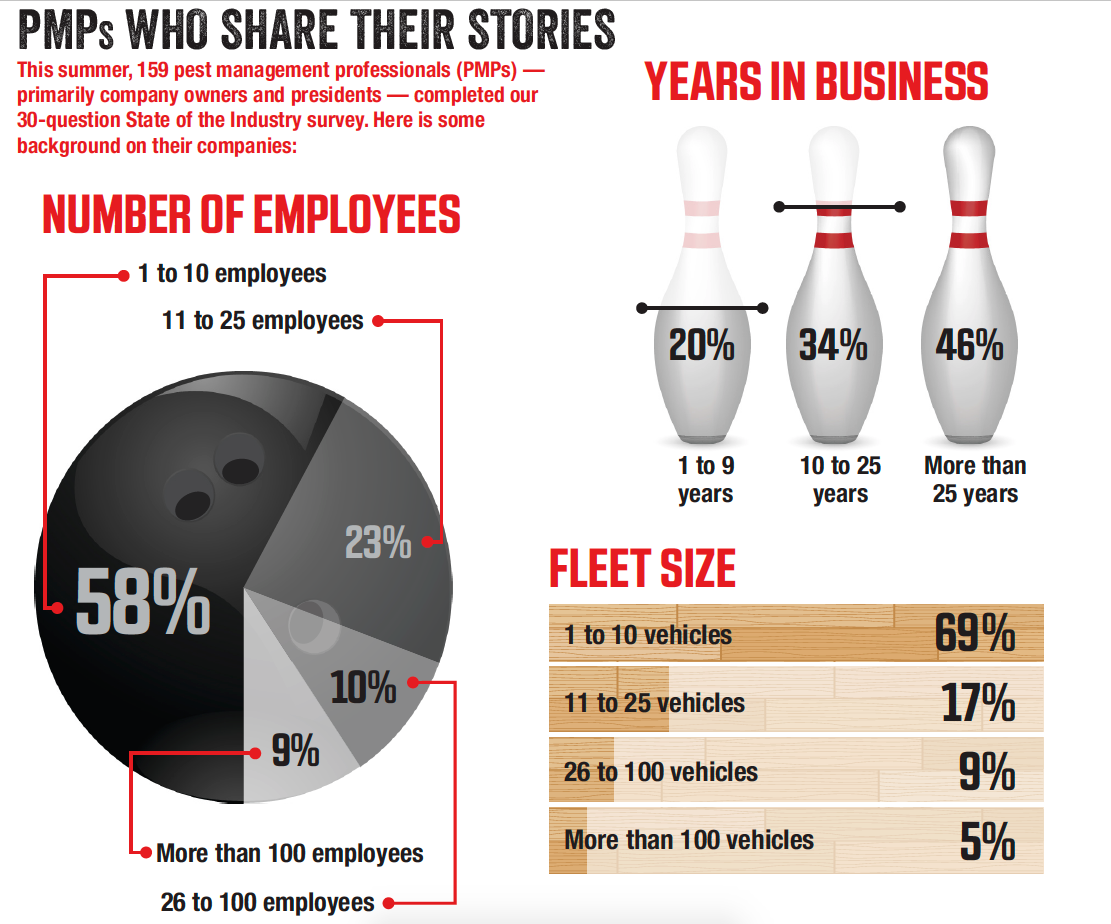 Pests on the rise

Mother Nature plays a role in PMPs’ financial performances. Business is good for Bob Maurais, president of Mainely Ticks Franchise Development Inc. in Windham, Maine, due to a pest problem that appears to be on the rise: ticks. From 2015 through 2018, he says Mainely Ticks has averaged a 15-percent increase in overall revenue. “We see continued growth commensurate with the threat of future tick encounters,” Maurais explains.

No wonder business for the 14-year-old company is good. According to Maurais, in the continental United States, 95 percent of vector-borne diseases reported in 2016 were tick-related. But with ticks, education is just as important as eradication, he says. “As infected ticks expand geographically, the threat to human and companion-animal health intensifies, as must our efforts to educate and service entire communities,” he says. “Our job is not to simply treat to protect one’s property; our job is to teach to better protect one’s community.”

A strong demand for bed bug management services, as well as newly added tick and mosquito management services, are expected to lead to double-digit growth in 2019 for Paul Alley, ACE, president of Pestmaster Services of the Hudson Valley in Kingston, N.Y. “As a member of the Pestmaster franchise network for more than 18 years, I have experienced double-digit growth the majority of those years, and 2018 is no exception,” he says. “Currently, we are trending 16 percent higher than 2017’s year-to-date growth rate.”

Lawson says that a goal of 9 percent revenue growth is about right for his company, and is an indicator of a good year. Growth happens organically, but it has to be controlled. “When revenue goals are set too high, some companies lower their margins to meet those goals,” he says. “Although that isn’t always bad, it can become a destabilizing force in the business and industry. By growing steadily in revenue, but maintaining our margins, we will be able to weather any hiccups that may occur.”

A wild ride: PMP’s 2021 State of the Industry Report