Staying true to the PMP Hall of Fame vision 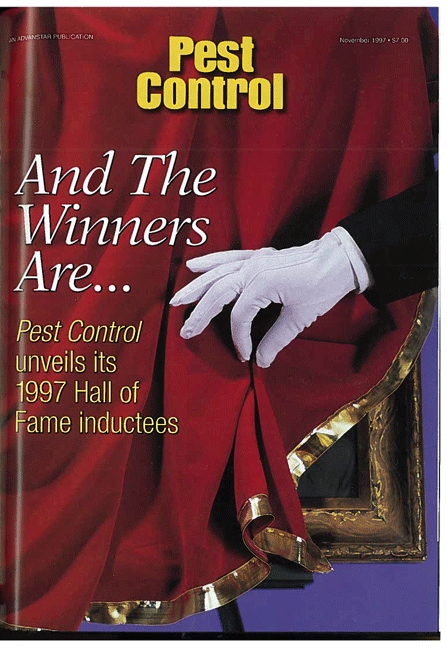 When I joined the staff of Pest Control, now Pest Management Professional, (PMP) in late 1995, I became part of a dedicated editorial team led by Publisher/Editor-in-Chief Jerry Mix and Managing Editor Lisa Shaheen, who later rose in ranks to become editor-in-chief. I owe a lot of my industry career to this dynamic duo, both of whom always made time to show me the ropes and encouraged me to keep challenging myself professionally. I’m happy to report that both continue on in the pest management industry today: Mix, who was inducted into the PMP Hall of Fame in 2005, is still on our team in his retirement as editor-at-large; Shaheen is the area district manager for Rentokil North America in the Cleveland and Youngstown, Ohio, markets.

In 1996, the three of us attended the first meeting regarding the PMP Hall of Fame. Dr. Austin Frishman pitched the idea as a yearbook of sorts, perhaps a 13th issue or an insert in the magazine. He was concerned that many of the fantastic contributions made by the leaders in the pest management industry were being lost to history. As the oldest magazine in the industry, he believed it was incumbent on PMP to commit their stories to print. As the conversation evolved, the idea for the PMP Hall of Fame went beyond biographical articles to an annual event that celebrated the industry’s evolution. Not only was Doc inducted into the PMP Hall of Fame in 2002, he received the “Member Spotlight” at this year’s event.

After several months of asking for and receiving nominees, the November 1997 issue of Pest Control announced the first class of inductees: Dr. John Osmun, who began Purdue University’s degree program in pest control and was instrumental in founding Pi Chi Omega; Bob Russell, Pest Control’s longtime government affairs columnist whose career included Orkin and Arrow Exterminators, and whose legacy includes helping to tame the 1972 retooling of the Federal Insecticide, Fungicide and Rodenticide Act (FIFRA); and Dan Stout, a prolific researcher with Whitmire (a legacy company of BASF) who registered more than 60 new products and was instrumental in bringing abamectin to the pest control industry.

Shaheen’s editor’s column for that issue, which you can read in its entirety by viewing this PDF, put the spotlight on the inaugural class of inductees. She wrote the profiles about all three men, visiting each in person. “These interviews weren’t about some pressing, hard-core industry issue, as is sometimes the case in this business,” she said in her column. “No, these were different. They were more like conversations with old friends. For me, it was an opportunity to simply let someone tell his story, and it was wonderful to just sit and listen.”

Shaheen also got to the heart of what the PMP Hall of Famers are about: “Three words come to mind — unique, humble and earnest… Could these characteristics and contributions be the formula for making a candidate worthy of such an honor? Apparently so. While each winner certainly has his own attributes… the combination of all three is what makes the light from these men shine in our industry. The bottom line is that each used their career histories to give this industry as much as possible. Couldn’t we all do that somehow?”

Her words still resonate today, as you can see in our event coverage of 2018’s PMP Hall of Fame ceremony.

Routing from radio to software