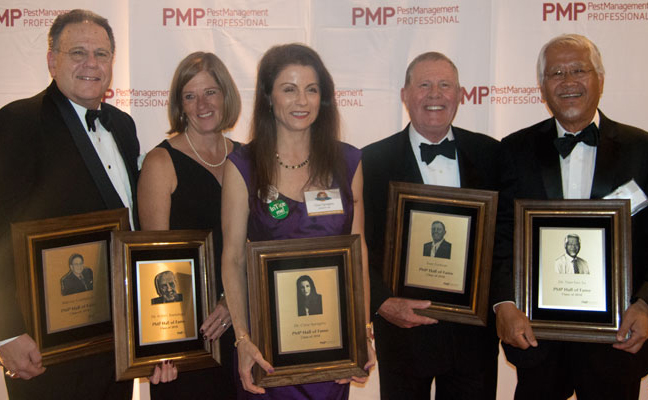 Pest Management Professional (PMP) celebrated the inductees to its Hall of Fame during a black tie dinner and induction ceremony held Oct. 22 in Orlando, Fla., the day before the National Pest Management Association’s (NPMA’s) 2018 PestWorld event.

To ensure those in the pest management industry won’t forget the visionaries who worked hard to make their jobs easier, the evening’s awards ceremony kicked off with a tribute to Dr. Austin Frishman, PMP Hall of Fame Class of 2002. A pioneer in the pest management industry who remains active to this day, Dr. Frishman served as head the structural pest control curriculum at the State University of New York in Farmingdale. His research and development led to improvements in cockroach bait and glue boards. Although retired, the PMP columnist continues to share his expertise by giving presentations at industry events, and keeps in touch with many of his former students.

The PMP Hall of Fame induction ceremony is an annual event. To nominate someone in the pest management industry, submit a nomination form.