How to get your detector dog to ignore distractions 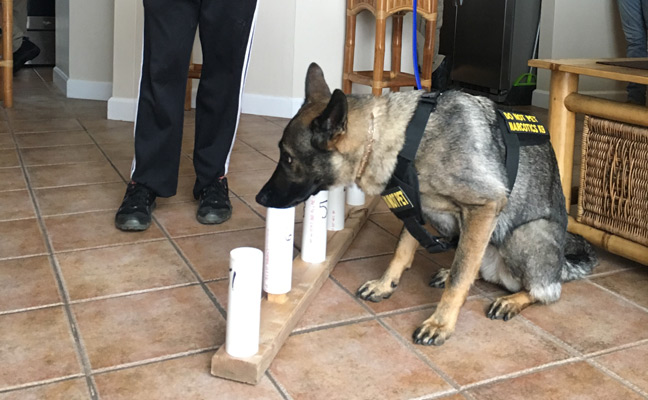 We’ve talked a lot about different types of distractions and how dogs may react, how to read their behavior and determine the dog’s state of mind. We’ve also talked about how a handler can exacerbate or sooth the dog’s reaction and make it more or less reactive to new things. Below are a few suggestions on how to get the dog to acclimate quickly to some new noise, sound or smell and simply ignore it.

Desensitization or acclimation refers to the dog becoming comfortable around the distraction because, it has seen it many, many times and nothing remarkable or scary happened. One big problem with desensitization is that it is hard to control the environment while you are convincing the dog that the statue in the park is not a dog-eating dragon. If some loud, unexpected noise takes place just when you’ve convinced your dog to approach and sniff the statue, you’ll be back where you started, probably worse off than when you started actually. I don’t use desensitization routinely because of this.

Counter conditioning describes when we transform the scary thing or event into something positive that the dog finds attractive. For example, if a dog that is scared of a smoke detector beep is fed tasty treats and is petted and verbally encouraged every time it hears the beep, it will soon come to see the beep as heralding good things rather than doom. We change an event that elicits fear into one that elicits excitement and anticipation of good things happening. It is nonsense that petting and treating a dog is a reward for timid behavior.

It’s a bit of a different story when a dog encounters something that triggers its drive. For example, when a high prey drive dog sees a scampering small animal, it may want to immediately give chase. Beagles are an example of this. Herding dogs like Border Collies, Shepherds and Malanois may want to pursue and even nip at large animals, including humans. This is an urge that is natural and in some dogs, almost irresistible. Dogs will not typically acclimate to something that triggers their prey drive and desensitization will not usually work. Participating in the chase of a prey animal is a self-rewarding behavior, whatever reward you have may become secondary to it.

Something I teach handlers to do to deal with distractions is to train a replacement or alternate behavior. An example would be to have the dog sit and make eye contact with you when you anticipate encountering a distraction and give the reward. If the dog is making eye contact with you, its focus will be on you rather than the distraction.

In order for a replacement behavior to work the handler must intercede before the dog has its senses flooded by the distraction. If the dog has run to the end of the leash, barking and straining, it’s too late; you’ll do well to just maintain control of the dog from that point. It’s also important that the handler have a reward that is of high value to the dog. If the reward doesn’t mean much, the dog may choose to ignore the handler and continue with the pursuit. It’s dog psychology 101; offer something that is important enough that the dog will work to get it.