A new study finds that the key to antibiotics resistance in humans could lie in how ants function within their colonies. Published in February by the Royal Society, the article is titled “External immunity in ant societies: sociality and colony size do not predict investment in antimicrobials.” 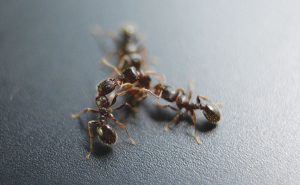 In a different study, three pavement ants (Tetramorium immigrans, formerly T. caespitum) touch antennae to determine whether they are nestmates. This species was among 20 that the Arizona State University team included in their study. PHOTO: DR. MICHAEL GREENE

According to science clearinghouse site TheConversation.com, the study “highlights how most ants, even from small colonies, produce antimicrobial chemicals in their bodily secretions. It also suggests those ants that don’t make these substances are likely to have some other method of controlling bacteria that could be investigated. So perhaps the answer to antibiotic resistance is under our feet.”

Our industry is well aware of the cleaning and grooming tasks that most ant species do so well — it’s a great way of spreading chemical, in fact. What sometimes thwarts ant control treatment, though, is how some colonies regularly segregate sick or dead ants from the nest.

“We also know that ants also produce their own antimicrobials in bodily secretions,” TheConversation.com article points out. “Now, researchers have tried to work out what affects how these chemicals are made. In a new study published in the journal Royal Society Open Science, researchers from Arizona State University investigated the antimicrobial activity of 20 ant species in the US living in nests with between 80 and 220,000 inhabitants.

“The researchers predicted that larger nest species would produce more effective antimicrobials, because of a greater risk of coming into contact with disease. Testing external secretions against Staphylococcus epidermidis, a common bacterium not known to cause disease, showed that 60 percent of the ant species produced secretions with antimicrobial activity. But, surprisingly, 40 percent didn’t produce an antimicrobial that could kill the bacterium.

“What’s more, species in larger colonies were no more likely to have antimicrobial activity than small colonies. This is surprising as it is generally thought that disease is more likely to be spread in larger colonies. The authors suggest that the 40 percent of ants without antimicrobial activity have other methods of controlling the spread of bacteria.”