Fiction: Crawley and the rogue PMP

Publisher’s Note: This series — “The Adventures of Crawley McPherson, Bug Man” — is a work of fiction. Crawley McPherson and all other characters in this series are products of the author’s imagination or used fictitiously. All names, places, locations and incidents are entirely fictional, and any similarity to places or people living or dead is purely coincidental.

Zelda Blackman heard a knock on the door. Even though she lived by herself, she wasn’t scared to answer it. After all, it was 1 p.m. and she lived in a relatively safe, middle-class neighborhood. She partially opened the door and peeped her head out. “Yes?”

“Ma’am, I’m Phillip Mabry, a pest controller, and I’m going door-to-door in this neighborhood telling people about our new and exciting spray. You’ll be amazed at the results … ”

“I’m really not interested, sorry.” She attempted to close the door.

He reached out his hand. “Do you have roaches or fleas? I guarantee you’ll never have them again if you let me use this new spray.”

She opened the door wider and eased out on the porch, looking both ways as if to make sure the man was alone. “Oh? Never again?”

“Never again. What few bugs you have now and the rest of this winter will all be killed and won’t come back next spring.”

“So, how is it that you can guarantee to rid my house of roaches and fleas when other pest control companies can’t?”

“Because I’ve got a product that nobody else can use.” He grinned widely.

She figured it was too good to be true, but now he had her attention. She wanted to know more.

“What’s the name of your company? Can I see some sort of identification?”

Mabry glanced up and down the street, pulled a small white card out of his wallet, and handed it to her. “Mabry’s Bug Stompers. There, that card is issued by the state. You can read my credentials. It says I’m certified to purchase and apply restricted-use pesticides.”

“It doesn’t say that. And it doesn’t show your company name on it anywhere, just your name, photo, and the words ‘Category A,’” Zelda look at him evenly. “I don’t understand.”

After studying the certification card for a minute, she had questions. “OK, so how does this work? How much will it cost for you to treat my house?”

“You own or rent this place?

“What difference does that make?”

“It’s more complicated if you rent because we have to go through your landlord.”

He nodded, as if pleased. “My fee is $200 cash, up front, Ms. Blackman. It’s a one-time fee. I can come back and spray again for free one more time, if needed, but I guarantee that won’t be necessary.

“To be honest, I have a terrible problem with cockroaches.” She frowned. “Little ones, mostly in the kitchen. I’ve had two other pest control companies out here over the past six months, but they can’t seem to get rid of them. Do you have any idea what those little roaches are?”

“No, it doesn’t matter what kind they are. I can guaran-damn-tee you won’t have any roaches after I make my treatment.”

Zelda was surprised at his salty language, but she figured that had no bearing on his pest controlling abilities. “Then I agree to let you spray. When can you get started?”

“My truck’s parked just down the street there. Let me get my sprayer.”

“Don’t I need to be gone from the house while you make the treatment?”

“Naw,” he said confidently. “Won’t take but a few minutes to spray around inside on the baseboards and such — ” He stopped short. “But I’ll need that payment before I begin.”

Zelda began to have second thoughts. “Two hundred dollars. You sure this stuff works?”

“Sister, this stuff would kill a horse if I sprayed him with it.” 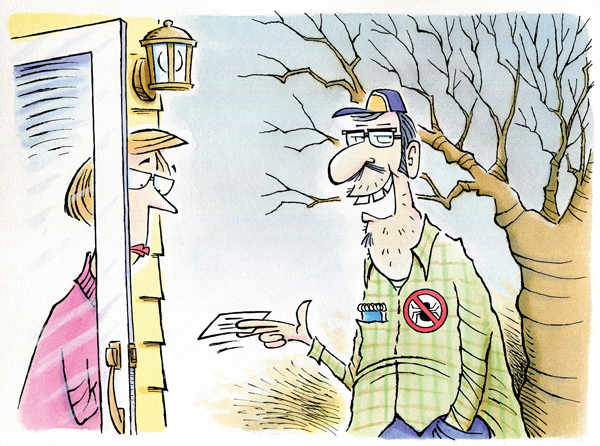 That same day, Crawley met MJ after work for a drink at her Uncle Kelly’s pub, something they had done a few times lately. They sat in a wood-paneled booth with dark green seats. Soft yellow recessed lighting made the place feel warm and inviting. Booths lined the outer walls of the establishment, while the bar itself was located in the center of the room.

“You sure you gonna drink soda again?” Uncle Kelly asked, eyeing Crawley. “We need to work you up to something stronger to calm your nerves. You seem fidgety.”

“No, uh, this here soda is fine.” He gripped the can tightly. “Thanks.”

MJ laughed. “Like I’ve told you before, Kel. He’s new to all this.”

Crawley blushed. With the exception of being with MJ, he felt totally out of place.

After Kelly left them, MJ smiled at Crawley. “It’s December, Crawley. You and I have been through some stuff this year, haven’t we?”

He raised his hand as if to check his hair, then caught himself. It’s just a saying, Crawley. She doesn’t really mean let your hair down.

“Tell me your most memorable case we worked this year,” she prompted.

“I guess bed bugs in the chicken house. That really freaked me out, seeing thousands of bed bugs crawling across the yard. I had no idea they could disperse like that.”

“For me, it was that Higginbotham case. When we saw Shea sitting in that big chair with bandages all over her, I almost busted out laughing. I’ve never seen anything like that in my life.”

“Me too!” Crawley said. “I thought she looked like someone out of them old 1950s horror movies.”

“And the look on her husband’s face when you told Shea that no-see-ums don’t go into people’s rectums! I’ll never forget that.”

“I was thinking he was going to fight me.”

“And Mrs. Welch’s bird mite problem … Do you know why she was sleeping on the couch in the living room?”

“Because that’s where her husband used to sit before he died.” She paused. “Isn’t that sweet?”

Crawley absolutely had no
point of reference for that kind
of thing. His parents’ relationship had been complicated, to say
the least.

“What’re you going to do for Christmas?” MJ changed the subject.

“Might go to my aunt’s house, but just for the day. I’ve got to catch up on my reading.”

“What kind of reading?”

“Bug books, pest control magazines, and stuff like that.”

MJ threw her head back, laughing. “You’re something else, Crawley, you know that? Someone could easily write a series of articles on all of your adventures and publish them, like in a magazine.”

“I guess,” he fumbled for words. He seemed to never understand what she meant.

Contributor Dr. Jerome Goddard is an extension medical/veterinary entomologist at Mississippi State University. He is also a PMP Hall of Famer (Class of 2012). He may be reached at jgoddard@entomology.msstate.edu